I've been mentioning that I'm trying to work through more of the books that I own but have not yet read. First I brought it down to under a hundred; now I'm trying for under ninety. It's hard because I don't want to completely stop buying new books, either. I just can't let them build up so much anymore, so now I have to prioritize new books (and not buy anymore new books if I haven't finished the ones I've just bought) and yet also make my way through the old ones.

Sometimes that means I look for the quick reads. I thought that Thomas Williams's The Heart of the Chronicles of Narnia: Knowing God Here by Finding Him There would be quick. When I picked it up, though, I was a little embarrassed to see that it was published in 2005 and I probably bought it in 2005 (or maybe 2006) as well. So that means I've had this book for over 15 years without reading it. Oops. 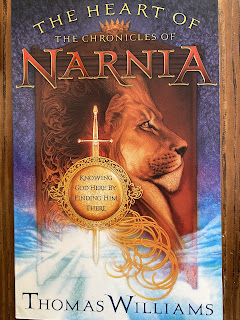 When I was fourteen, I loved the symbolism or "applicability" of Narnia. But reading a non-fiction book like this may have seemed more intimidating than reading articles online or even reading all the entries in Paul F. Ford's Companion to Narnia. Maybe that's why I didn't read it at the time? And then later, it seemed like I already new all the symbolism. Aslan is a Christ type, Eustace has his baptism scene, The Last Battle mirrors the book of Revelation, etc. I knew background on C.S. Lewis, as well. So what was the point in a book that so clearly was designed by publishers to capitalize on the monetary opportunities brought up by Disney and Walden Media's 2005 Narnia movie?

The thing is, though, Thomas Williams did a great job with this book. If you haven't thought about all the applicability in Narnia, then this is a quick and easy way to revisit the stories with that perspective. But even if you have, the revisiting is still worth it. Maybe you get a reminder of a certain scene you hadn't considered--or you even take things to a deeper level. Because the symbolism, if that's what we agree to call it, can be pretty easy. Obviously Aslan is like Jesus. The Magician's Nephew obviously describes creation and the fall. Obviously Turkish delight is sin and temptation. But there is more to it.

There is also the exploration of the spiritual journey. Narnia contains examples of morality: sin but also redemption, failure but also repentance, faith in action, and consequences for our failure. This book delves into all of this and provides that direct application to our own lives. That is, we'll hear about the example in Narnia, the equivalent in the Bible, and what that means toward us today. You could really easily make a Bible study out of this book. It's about Narnia but it's also about growing our own Christian walk.

Thomas Williams takes not just Narnia but also other writings of Lewis. He references his other fiction and non-fiction. I've read most of that, which is helpful. But you don't have to have read any of it. Each idea that he references he also explains. So this book is also a nice overview of C.S. Lewis's ideas in general. Again, it may not necessarily have completely new ideas--but it doesn't need to have them. Just as Lewis is known for presenting deep concepts in simple form, Thomas Williams takes the whole of what C.S. Lewis aimed to do with his writing and interprets it with simplicity.

So I ended up enjoying this book so much more than I'd been expecting. I certainly wasn't expecting that I'd feel like blogging about it. But it reawakened my interest in Narnia. I remembered not just why I loved those stories, but also what I respond to and what excites me. I like pondering visuals and concepts both that remind me of God's presence, his existence, his creation. Narnia reminds us that we're all searching and grasping and constantly getting reminded of something that we can't quite explain--and that's us seeking God because as his creation we crave him more than anything else and nothing else will satisfy. So even though this book is no longer new, I would still highly recommend if you have a strong or even just a mild interest in Narnia.

Posted by Deanna Skaggs at 9:32 AM