Sometimes we experience disappointments. Such, unfortunately, is one of Alter Eco's newer products, their Hazelnut Butter Bombs. When I first heard of these, I couldn't wait until they showed up in my usual grocery store. I do enjoy hazelnut and chocolate (not Nutella--Nutella is just oil). But now that I have them, well, I could do better without them. Let me elaborate because perhaps you will feel differently. 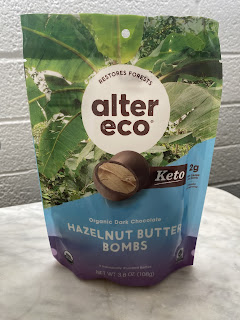 The bag contains nine individually wrapped chocolates. Below the rainforest greenery is a combination of blue and purple that, when carried onto the wrappers, gives a spacey look. (Or maybe I'm just thinking too much sci-fi these days now that I renewed Netflix so I can watch Stargate.) Really, don't they look like little round globes? 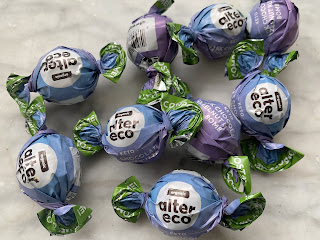 Colors aside, both the wrapper and the shape, though, aren't exactly new. This is the same concept as with Alter Eco's truffles, except that there is hazelnut butter inside. (There is also an Almond Butter version.) Not to many visual surprises with the filling: it's pale tan. There is perhaps a slight hazelnut aroma to it. The surprises come on tasting.

Okay, surprises is probably too strong of a word. The gist of it is that this isn't quite the effect I had anticipated. While normally Alter Eco's truffles have such a winning texture (for grocery store truffles) because of the coconut oil, here it is the texture that is off. Here there is an element (I think in the chocolate) that is too silky and slippery, as well as an overly buttery element in the filling. The filling also tastes too buttery, without having the sweetness of sugar to balance it out. (There is sugar added to the chocolates, but apparently not much.) And then you get a slight bitter twinge from the chocolate that doesn't go along with the butteriness. There is hazelnut flavor but not much; it gets lost. 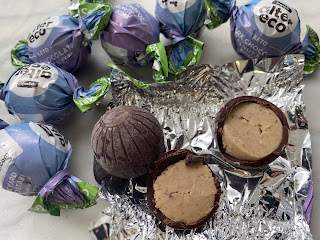 So the texture is wrong as well as the flavor. I thought I might be exaggerating the slight bitter twinge of the chocolate until I saw the tiny print on the back that says that the shell is 80% dark chocolate. Now, 80% on its own is fine; I often enjoy that percentage more than the more common 70%. I'm just saying that it felt a tad too dark for this context. If the hazelnut filling gave more richness rather than butteriness, maybe darker chocolate would make sense. On the opposite side, if the filling were a tad sweeter and the dark chocolate a tad lighter, then things might feel more cohesive. Whether we're going for rich and dark or for sweet and nostalgic, pick a side.

Besides sugar, other ingredients in here are agave fiber and butterfat, as well as coconut oil of course. No wonder there is so much slippery texture and buttery flavor. If they weren't going to add more sugar (I can't believe I'm asking for more sugar), some salt could have done wonders. Because of Reese's Cups, Americans already have an association between peanut/nut butters and salt. But these are marketed as being Keto--does Keto have anything against salt? I frankly have no idea.

Back to the chocolate. I know I mentioned it seemed darker than expected. But remember that I also said it felt like it added to the slippery texture element. So my question is, is the chocolate the one with the coconut oil in it? If so, it's smart from a manufacturer's standpoint: you can use less chocolate that way and also portray a silky texture that people less picky than I am might even appreciate. But I feel like I can taste the coconut this time, whereas I usually don't notice it in Alter Eco's truffles.

So I'm obviously not satisfied. Both the texture and flavor are off for me. However. Let's get back to that Keto thing. I've been seeing a lot of companies making chocolate energy ball type products these days. They'll stuff them with random "healthy" ingredients and market those ingredients or their health benefits. So more than reminding me of truffles or chocolate candies, these butter bombs remind me of such chocolate energy balls. That is, someone might buy them because they need something that will fit into specific dietary desires rather than something that simply tastes great. They taste fine; they're not detestable. I just don't particularly like them and would gladly give away the rest of the bag. So if I really needed a nut butter chocolate and this was somehow the only product that fit within certain restrictions, I'd be okay with them. I'm just not sure what those restrictions are. I would think there are other products on the market already that would fit the same restrictions and yet would be more palate-pleasing. But again, I don't know the details on Keto or plenty of other diets. So if something about the ingredients makes these appealing to you, they're worth a try. Otherwise, I'd recommend passing them up.