She Is Her Own Fair Lady, Not His

From time to time, you'll hear me mention how I watched Pygmalion back in 2008 and grew positively obsessed with the play and the performance. I suppose I had a bit of a literary crush in Henry Higgins: the actor portraying him gave him that charming, infectious energy that made him more into a lovable madman than a disgruntled and egotistical and rude bachelor-scholar. A lot pends on how his character is played--and on the overall structure of each particular version of the play. 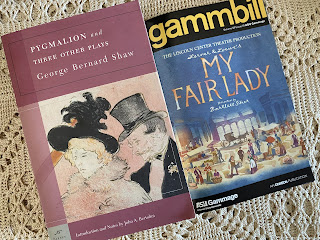 I don't believe I had ever watched the entirety of the musical version, My Fair Lady, until last week when the touring production was at ASU Gammage. I normally see a lot of plays and shows, but not at Gammage. I've only seen on there, and that was several years ago. But my "maybe" to see this one turned into a quick yes because it's a story I have so much history of enjoying.
I had mistakenly believed that the difference between the play and the musical was that Higgins and Eliza do end up together in the musical, even though they don't in the play. I guess I got that impression from the greater emphasis on love story type songs in the soundtrack. So I was a little surprised that that was not the case--and that there was in fact less chemistry between the two characters in this production than in the play I had watched before. In a way, that was a little disappointing given how fun their banter can be. And I prefer Higgins to be a lovable madman than just a grouch.
But the musical made its own exploration of Eliza herself. The shift was a deeper emphasis on her perspective. She asserts herself as a woman secure in her own identity, despite society's (and individual people's) impressions or ideas of her. She moves between classes, yes, but she is still Eliza. Henry didn't give her that--just as he cannot take it away from her when he continues to disrespect her even after she has done everything she can to please him. Eliza has always been secure in herself. She used to hold her own against her father: she kept money to herself instead of giving it all to him. So Higgins is no different: she gives him what she chooses to give him but she doesn't give him charge over her dignity or identity.
This is why we have the famous quote: "I sold flowers. I didn't sell myself." Eliza tires of Henry's game of changing class based on speech. She learns to speak well and so can pass as upper class and go places she couldn't have gone before when her words exposed her low social standing. But it all means nothing. She doesn't want to play a farce; she wants to be herself. She doesn't want to be seen as what role she can play; she wants to be seen as herself. So she doesn't want Higgins to see her as his successful language project; she wants him to see her as a person who has worked hard for him. And because he cannot, she leaves.
Like I said, I did miss the emphasis on playful banter from the play. But the musical gave a great exploration of identity and one person's self-assertion of identity. Given that identity has been a main topic of focus in my life right now, this was a welcome theme to explore. And of course I'll not say no to good singing and wonderful sets.
Posted by Deanna Skaggs at 12:32 PM