Almost three years ago now, I was completely taken with the movie adaptation of Ophelia (click here for that post). I called the movie, which is essentially Hamlet from Ophelia's perspective with some twists, an indulgence. When I stumbled across a used copy of the book by Lisa Klein on which the film was based, I nabbed it. But I couldn't bring myself to read it yet (I thought it might be too emotional at the time), so I let it sit on the shelf for a year or two. Finally, I chose it for my first read of 2022 because in 2022 I'm done pretending and I  just want to be who I am. 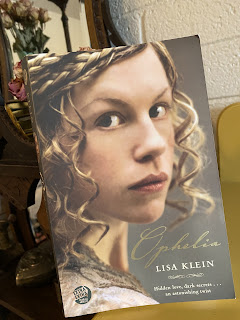 One of the reasons I so enjoyed the film back in 2019 was that I had recently gone through a break-up in which I was very reluctant to be parted from the other person. So it was like part of the healing process to see this new take on Ophelia's story. I liked the fantasy of it, the sense of it being too good to be true and also the sense of Ophelia's ability to exist after it was all over.

I had expected the book to be quite a sappy read. That's why I put it off. I thought it might be a few hairs away from a romance novel. That's why I thought maybe I shouldn't even read it--until eventually I admitted that I did want to read it. So imagine my surprise (and delight, I might add) to find that it is not a romance novel and it is not entirely sappy either. (Yes, there is some sappiness, but at a refined, minimum level.) Yes, there is a love story and there is indulgence in the sense that we are hearing Ophelia's side of the story--but it all ends there. This book is so much more.

This book contains all of Ophelia's wit and intelligence that made her a woman, as I mentioned in the other post, that Hamlet would love. We see her education and upbringing--or her sometime lack of upbringing. Ophelia has lacked steadiness in her life and she has lacked affection. So the gift of Hamlet's love was a welcome gift indeed. Yet she is intelligent and not flimsy, so she does not follow down Hamlet's path of madness and revenge. She is not willing to give herself up to chase after a love that is not returned. And here is where the book differs greatly from the movie.

While the movie was greatly fun in its portrayal of both Hamlet and Ophelia feigning madness, in the book Hamlet truly goes mad and Ophelia does not. She only feigns it for a time on her own and if perhaps there is some truth to it, it is because of her great grief and confusion. But she remains a strong character and makes a plan for her safety. This Ophelia is a woman who spent her teenage years contemplating the philosophy of love. After her tragic romance, she then turns to contemplating life and faith.

The movie completely skipped over Ophelia's time in the convent, which takes up about a third of the book. I wasn't expecting that. But they were fantastic passages. As a person of faith, I was able to read these and find a different kind of healing than I'd found in the movie three years ago. But simply as a historical fiction novel, this is appropriate content. These are questions that Ophelia would indeed have pondered if she'd passed through death and found herself grasping for healing and a new beginning in a convent.

There is only so much space in a blog post (especially without directly talking about plot). So I suppose I've touched on the main points I wanted to bring up. This book was beautiful. The language, the pondering, the questions, the themes--they all amount to so much more than a mere indulgence in getting to hear Ophelia's words. Books like this are why I used to read so much historical fiction.