Afternoon Tea at the Phoenician

I have over the years had the pleasure of afternoon tea at the Crown and Crumpet in San Francisco, the English Rose in Carefree, and Los Poblanos in Albuquerque. While the other two were fun, the La Quinta Afternoon Tea at Los Poblanos was the stellar standout not only in terms of afternoon tea but also for dining in general. It's a true culinary experience. How, then, would the infamous Afternoon Tea at the Phoenician compare to these past three teas? 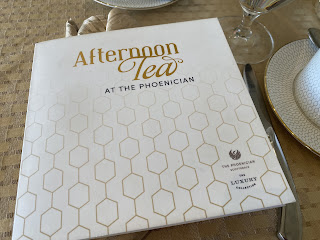 The Phoenician is one of those resorts well known to locals but not necessarily because everyone has been there. Their Afternoon Tea makes for a big draw to bring us in--even then, though, because it's a special occasion indulgence, not everyone has done it. It is a nice excuse to go admire the Phoenician, which is a lovely resort. Simply getting the chance to dress up and go listen to the live piano music is welcome. 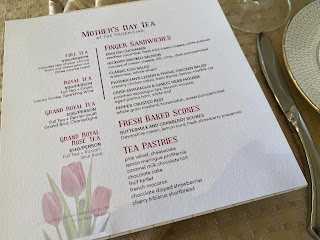 Though this is first and foremost a classy, high end tea, the set-up leans towards the lounging style. After all, taking a moment to rest and relax and enjoy one's self is the very essence of what afternoon tea is about. So the chairs at your table might be more what you would tend to find in a sitting room than a restaurant. And the wide view out the glass windows is a familiar sight, for locals, from a less familiar angle. 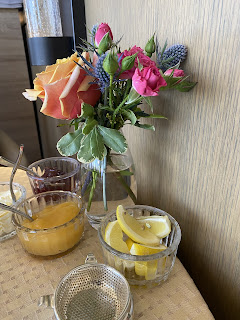 While they bring out a menu in the beginning so that you can choose your tea (I just stayed with Darjeeling, since I miss it now that I'm not drinking black tea anymore), they do take these away before serving you. It would be nice to have them to refer back to while eating so as to know what's what: it's hard to remember everything when there are six sandwiches and eight desserts in addition to the two scones. They had the Mother's Day menu going while I was there. This is a similar, slight adjustment to the regular menu; they also do this for Christmas. But along with the higher price, the Mother's Day tea also included a printed photo for each person that they took when we came in. That was a nice touch. 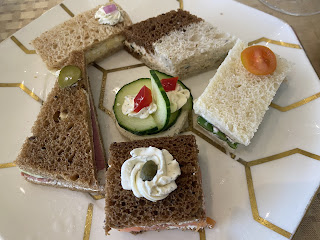 The aesthetic of the Phoenician is more modern. Yet the flower arrangement on the table had that perfectly imperfect and feminine vibe. As compared to receiving a tier of plates with all the courses, they brought each one individually. This does help to avoid unwieldy tiers and cramped table spaces. They brought out the sandwiches first, all arranged on one plate per person. While they're cut up nice and cute, I can't say that any of them particularly stood out to me. Most of them all tasted pretty much the same, maybe because the bread was so similar. 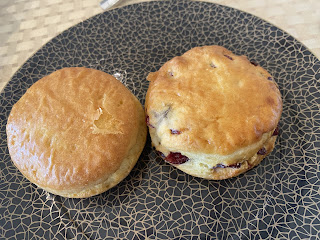 We received the scones next, one buttermilk and one cranberry. The cream and lemon curd are what bring life to scones. I didn't care for the cranberries. 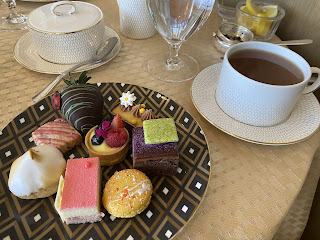 The desserts came last. They're cute and fun looking, right? I enjoyed looking at them before beginning to eat. But there is a definite contrast between the posh, classy look of the Phoenician and the cutesy, colorful look of the desserts. Granted, the Mother's Day desserts are slightly different from the usual ones. But it's just an observation. 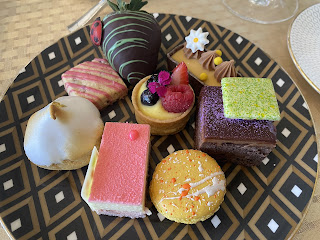 That being said, I did enjoy them. I also plucked the little ladybug off of the chocolate strawberry and put it into the "flower garden" dessert. Just for fun. The flower garden was the caramel milk chocolate tart, and I did enjoy that one because I'm a fan of caramel. Otherwise I'd say the best desserts were the lemon meringue profiterole (maybe because I never have those), the cherry hibiscus shortbread (because fresh shortbread is a pleasure), and the fruit tartlet (because berries and cream are classic). The pink velvet cheesecake was pleasant, too, like a soft cake with the cheesecake element acting like a cream cheese frosting. The chocolate cake was dry and not of much interest.

It's impossible for me to not be a harsh critic after that tea at Los Poblanos; nothing will ever compare to that. And given that the Mother's Day tea at the Phoenician was double the price of the one at Los Poblanos (normally it's only a 50% increase, but even that is significant), I do wish the foods matched the price. They give you quite a few, yes, but they're small, so it isn't much more than average for an afternoon tea. If you're looking for a culinary experience, this tea might not quite do it. But that isn't to say that the experience isn't worth it.

It's the whole package deal of going and enjoying one's self and sitting with comfortable company in a beautiful setting with excellent service that makes Afternoon Tea at the Phoenician special and a wonderful way to celebrate an occasion.

Posted by Deanna Skaggs at 9:44 AM