Further Up & Further In

Last fall, I had my first two introductions to The Fellowship for Performing Arts, first with their live play of The Great Divorce by C.S. Lewis and then with the film version of C.S. Lewis: The Most Reluctant Convert. While I did enjoy both, the film had two main critiques from me. I find both of those addressed in their newest play, C.S. Lewis on Stage: Further Up and Further In, which had its first live performance in Phoenix this past weekend (and will probably be back in town once they have the finalized version ready). 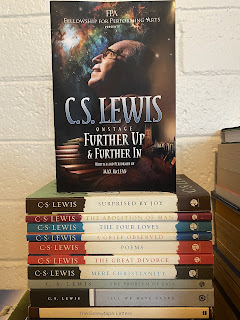 I wished, going in, that I knew more what to expect. C.S. Lewis has so many books, and yet here was a play that wasn't based on a specific of his writings. All I knew was that it was a kind of sequel to The Most Reluctant Convert. Whereas that story centered around Lewis's journey toward belief in God, this one was meant to show how he became such a prominent voice in Christian writing and speaking. It turned out that this was less biographical than the first part of the story; this time around we heard certain beats of what was happening in Lewis's life simply in terms of what he was writing or thinking or working on at the time. Like, for instance, hearing about the war in order to know the context in which he was giving his radio talks.

I in fact found this a benefit. Instead of being distracted by whether we're supposed to be watching action unfold or hearing narration go on, the audience knew that we were simply watching a monologue about philosophical, spiritual, and religious concepts. When watching the film, I'd mentioned that the monologue style probably worked better in a live play, and yes that was indeed the case. While we are still seeing Lewis the scholar approaching various deep discussions, Max McLean in person is able to take you through these intellectual journeys in an engaging way. He keeps to the scholarly tone of voice that Lewis has in the surviving radio dialogue, while also somehow subtly giving his dialogue more dramatic beats.

And the digital screen that they used at the back of the stage was wonderful in aiding those beats. I had thought that they made good use of a screen with The Great Divorce, but this took it a step further (in a different way, of course, for a very different type of production). The set was a sparse portrayal of Lewis's office; it more gives the actor a place to move around in. So it was the screen that matched the content of each sub-topic he brings up. We got to see either context (like the war) or a visual portrayal of emotion, if you will. The galaxies, or the tree growing beside living water. There are no words to express to you what I felt when I saw that tree. While there are plenty of trees in Lewis's writing and in the Bible, that specific tree isn't described in that specific way anywhere that I know of. And yet I've seen that tree before in my mind, and so when I saw it on the screen it was perfect visual for the concepts that the monologue was approaching.

Besides the live play versus film format, the other comment I'd had after watching The Most Reluctant Convert was that they hadn't emphasized Lewis's focus on the concept of joy as much as I'd expected. They did in this play, though. I vastly appreciate that because, though I've used different words perhaps to describe it, I know exactly what Lewis means when he talks about joy. I love engaging with that concept. While the film was largely based on Surprised by Joy, which focuses on joy so much that it's part of its title, the truth is that FPA in these two pieces combines various of Lewis's writings. So there will be something from this book here, from that talk there, from this letter over there, from this fictional book next. If The Most Reluctant Convert was meant to be Lewis's introduction into accepting the existence of God, Further Up and Further In gets into the meat of Lewis's contributions to Christian dialogue. Besides joy, another notable topic that came up was his assessment that Jesus had to be either lying, mad, or telling the truth. I do wish we could, as a society, get back into more dialogue like this. Lewis convinced a lot of people that Christianity was true because he answered the questions he himself had had.

This brings me me to one of my lingering questions about FPA. I'm really enjoying the way in which they provide me with engaging, intellectual Christian content. Contemporary Christian content doesn't always have enough meat on its bones to interest me; I like to go deep. But FPA also states that they way to reach a wide audience, and isn't deep intellectual content more niche? C.S. Lewis talked about presenting ideas for the person who would like to believe in Christianity but "finds his intellect getting in the way" (which might not be the exact quote), and yet he was also someone who could speak to the masses and present deep concepts in a stripped down, simple, easy-to-understand way. So is FPA striving for a similar balance? It's a high goal. And I suppose all three shows I've gone to see (the two plays and the film) have all been about sold out, so the audience is responding.

I almost skipped this one, and I'm so glad I didn't. I had one of those artistic response moments in which I was elevated out of myself. I came back into my skin refreshed. Just like with The Great Divorce, I felt my perspective renewed, and boy do I need that constantly renewed.

Labels: CS Lewis, Further Up and Further In, plays, The Fellowship for Performing Arts