The journey into Heaven must, by necessity, mean ridding away every trace of Hell. C.S. Lewis's The Great Divorce describes a bus ride from Hell into Heaven; the narrator observes various other characters and what they are unwilling (or occasionally willing) to shed or leave behind in order to proceed into Heaven. The Fellowship for Performing Arts was in town with their production based on the book (previously they have also done The Screwtape Letters, though I didn't catch that one--and they have the upcoming film The Most Reluctant Convert fast approaching). This take was adapted by Max McLean and directed by Christa Scott-Reed. 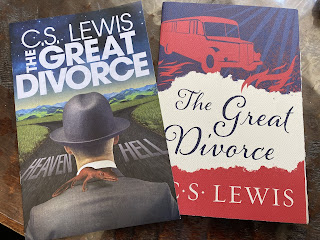 The excellence of the production is shown by the fact that it would seem to be, based on the book, to be a tricky adaptation to make, and yet watching the production itself felt so seamless and fluid. Four actors took on all of the roles, set dressing was mainly limited to their four suitcases, and a large screen on the back of the stage that allowed the transition through the, um, limitless spaces. So there was a stripped down quality to it all and yet great richness in what was portrayed. This was a case of positive use of a screen; it allowed the audience to see the many landscapes described in a way that set dressing could not have done. And yet it didn't detract from the simplicity of a plain set, and the plain set allows for focus on the dialogue.
This story is, after all, mainly dialogue. At 90 minutes, it was short enough to keep attention spans from wandering. The interactions between the characters also keep rolling along at such a pace that each mini scene only has to hold your attention for so long before it is over and replaced by another. So there were no pacing issues; never did I feel like I was getting bogged down or like the pace was too slow. Instead, the interactions made quick work of describing the core features of each character and his/her struggle or vice.
Like I said with the book, it's easy to see oneself most strongly in a particular character. I'm not sure if this was because of the adaptation or simply from seeing it on stage instead of on the page, but I also felt particularly like I was seeing aspects of society and of the church in the different characters. Rather than this being accusatory (that is, for us to see others as "the problem" rather than ourselves), it helps with compassion. C.S. Lewis in general addresses people's real concerns and questions. So with this sort of portrayal, you have a chance to get into someone's perspective and see what holds them back or what they don't quite understand about your perspective that leads them to not agree with you.
Even though there is heavy content in this story, the play ended up being ultimately uplifting. There is the consciousness of the danger of holding ourselves back--but there is also hope in the realization of that departure out of all things related to Hell and the entrance into Heaven. There is great joy in the hope of one day leaving pain and the shadow of death behind. So you could say that this play helped put things in perspective.
Posted by Deanna Skaggs at 10:54 AM