Coming to the second of the three single origin chocolate bars from Eldora Chocolate, we have the Belize Maya Mountain 70%. I mentioned that I was trying to get less common origins. While Belize I would consider less common, I did review the Belize bar from Zak's Chocolate last year (click here for that post) and named it one of my favorites from them. As I glance back at my comments there, I do see some similar descriptions to what I came up with for this one. 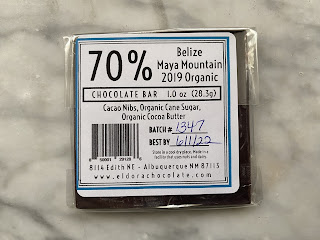 We have the same simple packaging as before. The handwritten batch number and best by date add to the handmade, small batch appeal. This is the way chocolate is meant to be made: in a personal way. The chocolate's aroma this time around was deeper and more like cocoa nibs. In fact, it was a deeper and stronger scent than I would have expected from the somewhat lower cocoa content of 70%, as compared to say an 85%. 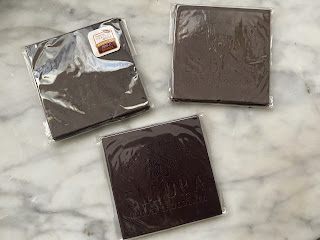 Yet the flavor begins with what I called a blue sweetness. There was almost perhaps a hint of floral notes within the foggy deepness. After the halfway point, I found the slightest hint of smokiness. Then the chocolate mellowed out while still staying on the dark side. That is, it's dark and edgy but still safe--that is, it doesn't come out with surprising flavors bursting forth. It finishes with a warm last kiss of chocolate. 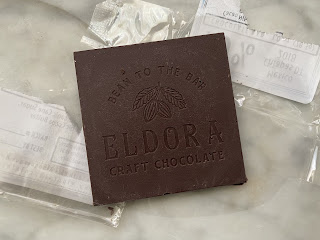 This chocolate is different but in a subtle way. On one hand, it feels like straightforward chocolate flavor, which is a gentle tone. Yet on the other, it has that edgy depth. And that combination of those two traits is what makes it unique. Again, this is similar to my comments about the Zak's Belize bar, except that I was focusing on metaphors there whereas here I did manage to guess at some flavor notes. I wonder what a side by side of the two would be like. I more commonly have the chance to compare different cocoa origins from the same company than I do the same cocoa origin from different companies.

This particular bar I chose not just because I haven't had a lot of Belize chocolate but also because I saw that it had won bronze at the International Chocolate Awards. Having now tried the chocolate, I can see why. Once more, Eldora has shown that they can bring about the right texture in a chocolate and also know how to present a full flavor profile to showcase the individuality of each cocoa origin. This particular bar will satisfy if you're looking for a unique expression of flavor notes.