On the edge of Downtown Phoenix is a place that rightfully calls itself "Arizona's most unique live entertainment venue." It's called The Duce, and it's a warehouse speakeasy, a vintage-style eatery, and a true step back in time. Well, that last part is specifically in regards to their Wednesday night swing dancing, which is our focus for today. 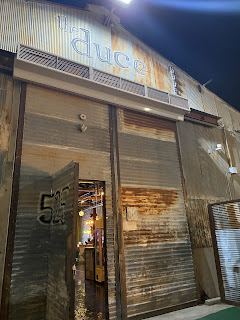 You know when you watch videos of the Star Wars droid-builders? That's what it felt like stepping into this space; it was like finding a niche community brought into real life. One might go swing dancing just for the fun of getting out and being active and being around people, but generally this specific type of dance attracts those with a flair for the vintage. Especially given the venue's atmosphere, the evening is an escape from the twenty-first century. There is classiness (from the modern perspective) in swing dancing, and yet there is also this loose, rebellious type of freedom about it (which you can see when you look at what people thought about it a century ago when it was new). 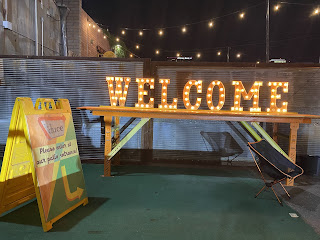 Whether you come semi-dressed-up or in plain clothes, with a vintage flourish or without, you'll fit into the space. Deciding on what shoes to wear, I almost forgot that I already own the perfect pair. My Rockport old lady comfort shoes (which you can apparently still buy, even though I've had them for years) fit in perfectly with that 1930's vibe--and being comfort shoes, they are, well, comfortable. Comfort's a must; lace-ups look just as good with a dress as anything else. Being, though, that I like going vintage, I was glad to know that I fit in just as I was. (Technically speaking, of course, the 19th century is more my era, so was going into the 20th century stepping backwards or forwards in time?) 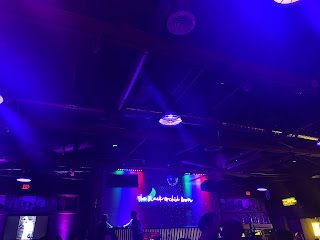 If you go, the first part of the evening is the lesson. That's great of course if you've never been swing dancing before--though it's still a lot to pick up your first time. They rotate partners, so it really doesn't matter if you go with a partner or not. Dancing with different people ends up being a chance to learn something different with each person. You realize more about how you move when it's placed in contrast to different people. Even after the lesson, most people were dancing with multiple people throughout the night.

That in itself is quite a classy, old world vibe. During the lesson, they gave a joking-toned admonition to let them know if anyone was creepy and they'll kick them out. In contrast to being a place where you have to watch your back, it's a safe space. It's like you really have gone back nearly a century to a time in which basic manners and respect are the norm. You can step on and off the dance floor with people you've just met and it feels natural. And might I add, too, that it's nice to (as a female) feel feminine with partners leading you in different steps. (Well, I guess it wasn't all traditional roles--I also danced with a fellow lady at one point, which was fun, too.)

I've been contemplating that concept of leading and following to make my obligatory metaphor. One of the things I learned (as someone who really hasn't danced at all) was that you have to maintain your frame (which, what do you know, also means your arms and not just your back/shoulders) in order for your partner to be able to lead you. That is, if you keep losing frame in your arms, it's harder for them to indicate which way they want you to go. So you have to be solid in yourself in order to be led. Are you sensing the metaphor yet?

It would seem like too much contrast. You might ask, isn't following the passive role, whereas leading is the active role? But the truth is passivity doesn't get you anywhere, even if someone's trying to lead you. And allowing yourself to be led isn't being passive; it's partnership. So in order to be part of a partnership, each person has to be active and whole. And in order to be active in one's own life, one must be stable and poised in order to react to whatever may come. (I could also keep the metaphor going to describe what it means to submit to God's leadership in life, but maybe that's enough rambling for now.)

So there we have it. Step into new spaces and you never know what you might find. Maybe it'll be a swinging, vintage speakeasy.

Posted by Deanna Skaggs at 5:09 PM