The Great Divorce of Heaven and Hell

Literature students will remember Blake's "The Marriage of Heaven and Hell." I also remember hearing C.S. Lewis's reaction to such a concept as is presented in the title: he affirmed that no, we should not be combining heaven and hell, but rather separating them. He wrote The Great Divorce based on that idea. Being in the mind to read some more Lewis, I chose to (curbside) pick up this title. The notion of not taking anything from hell with you into heaven felt quite appealing to me right now. I got the idea of something cleansing, I suppose. 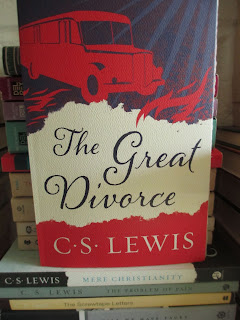 Not exactly so, though that isn't a bad thing; it's just slightly different from what I'd expected. I'd also had the impression until I actually looked at the book's page online that this was simply non-fiction like The Problem of Pain or Mere Christianity. Not quite. It's fiction, but more of a direct allegory and less of a novel than Till We Have Faces. It is the story of a man who gets on a bus from hell into heaven--everyone acts like they're just visiting, though whoever chooses to stay can stay.

So this narrator walks around observing the others who came with him on the bus and what he sees in this sort of threshold territory of heaven. So what you are seeing along the way are all the things that are holding these people back from accepting the gift of heaven. The things they won't let go of, the things that they refuse to put in second place, even if it's to put a loving God in first place.

You also see how these things do not practically fit inside of heaven. The book expires the concept of how it is exactly that you literally cannot put hell inside of heaven, nor does hell have any power over heaven. This concept is somewhat reminiscent of Till We Have Faces and certain moments in Narnia, too: it's that sense of not being able to understand or partake until you have given up your old eyes and taken on your new ones.

Probably everyone will find a character in this book that they most identify with (that is, from the people who go up to visit heaven). We all have different weaknesses (I mean, the one that is strongest varies from person to person). What's nice in this book is seeing a physical illustration of how we need only accept the offered gift, we need only place the highest thing in the highest place, in order to be released from our old selves and enjoy ultimate hope.

It's a short book. And honestly, it probably works better if you're coming from a perspective where you believe in Purgatory and/or the whole Hell-as-annihilation-theory-or-whatever-it's-called that Lewis addressed in The Problem of Pain (maybe elsewhere, too, that's just where I know I've seen it). But if you just take it for what it is, a fictional story that is the setting for exploring the concept of the separation of heaven and hell, it's definitely a thought-provoking piece.
Posted by Deanna Skaggs at 9:15 AM