I'm a little stumped. When I saw this bar, I said, yes, of course I've had that brand before, but I'm just not sure if I've had the Lavender Milk Chocolate before or not. But then the name Leith Chocolate didn't sound familiar--and it didn't turn up in my database of reviews, either. I knew I'd had this company's chocolate before, so I looked up the Gin & Tonic bar that I remembered. Ah. That one is by Coco Chocolatier--but the style of the packaging is so much the same that I knew they had to be the same company. It isn't uncommon for a company to change names, or even to go by a different names in different countries. But there is no website listed for Leith Chocolate on the packaging and not much comes up under that name in the searches. However, the physical address listed on the chocolate bar matches the one on Coco Chocolatier's website, so whatever the story is behind the two names, we can conclude that these are indeed the same Scottish company. 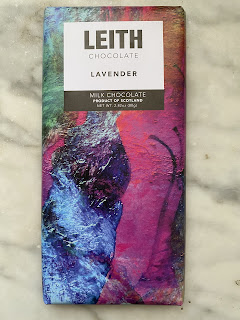 Although I didn't care for the "watercolor painting from a '90's hotel room" look of the other packaging, there is a slight difference with the coloring and texture here that is more appealing. It's a bolder, less neon look. In fact, the simpler font of the label, as well as the black rectangle below the white, also contributes to a steadier look. 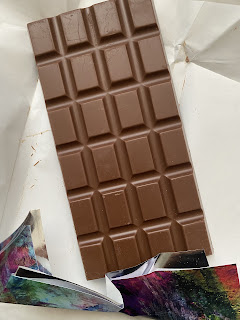 The bar inside is sleek. It's molded perfectly and so is smooth, as well as light in its creamy color. It's aromatic, too--like peppery lavender. This peppery lavender is the same that immediately comes through in the flavor, as well. As I've mentioned before, there are generally two types of lavender flavor when it comes to things like chocolate. One is sweeter and more floral, and the other is this peppery kind. I don't necessarily prefer the peppery lavender, but it does work well here. And that's because of the chocolate.

Although this is supposedly a 40% cocoa milk chocolate, it seems like it's lighter. It's nice as a milk chocolate, but it's fairly on the milky side--which I'm associating with a lighter percentage. Or it may be that when it comes to darker milk chocolates, I'm used to Theo's 45% Pure Milk bar--and 5% is still a difference. European milk chocolate does also tend to be milkier and American milk chocolate sweeter, so that may be a factor here. All this to say that this is a creamy milk chocolate. It has more depth than average, but not a huge amount. And because the lavender flavor is dominant, the chocolate doesn't have much chance to take the focus. But because the light cocoa flavor comes with all that cream, it makes for a good contrasting base for the peppery lavender. And it does indeed become evocative of the ever-growing-in-popularity lavender lattes (no pumpkin spice for me please, but lavender lattes I can get behind). Or, if you prefer, you could also say it's like a cup of Lavender Earl Grey with cream and sugar.

Either way, it's a lovely bar of chocolate--if you like lavender. (If you don't, I hope you don't need me to advise you not to get a lavender chocolate bar.) I for one prefer stronger lavender to barely-detectable lavender, so that is perhaps something to keep in mind if you prefer a lighter touch of flavor. But the flavors that are here are balanced well. And we've just passed lavender harvest season (in the southwest, at least), which makes this feel like the perfect time for enjoying lavender chocolate.

Posted by Deanna Skaggs at 7:44 PM