I guess it was the whole "small chocolatier" thing (out of Scotland, no less) that drew me to Coco Chocolatier. And while I've never had a gin and tonic, the ides of a Gin & Tonic Dark Chocolate sounded like something worth trying, something a little different. At first I thought the colors of the packaging created a cool vibe, but now I'm split. They remind me of the watercolor paintings that (less than high end) hotels used to have in their rooms in the '90's. Then again, a dress at Anthropologie right now reminds me of those same paintings--so maybe the look is coming back in? 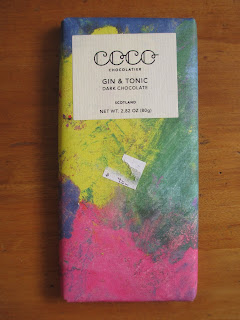 The bar itself comes in that standard mold with the small rectangles that are about the size as in a Green & Black's bar. Great size; I approve. As you can tell by the bloom, I did let this bar sit for quite a while before I got around to reviewing it; sometimes that just happens. Add to that the fact that I've been so irregular with posting lately and, well, you get some bloom sometimes.

Nothing special to the chocolate's aroma. Just smells like standard dark chocolate. As far as texture, the age did unfortunately show in this area, as well. Old chocolate gets kind of hard (and it takes months and months for chocolate to get old, so sorry), so I went ahead and chewed a little to get it all melting and releasing flavor. Otherwise it would have been quite a slow and strange process. 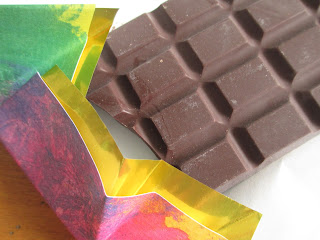 I do taste something other than chocolate. It was hard to say what exactly. Some "alcohol" chocolates have an alcohol taste to this one, but this one does not. It also, by the way, does not contain any actual alcohol (some chocolates do). As I mentioned, I've never had a gin and tonic. I've only had gin in mixed drinks, so I don't necessarily know what gin on its own tastes like. From this chocolate, initially I was trying to describe that other taste as sweet, something akin to vanilla and marshmallow--but that wasn't quite right.

And you know what, there is the ingredients list right there available to see. It contains vanilla flavor, juniper oil, lemon oil, and lime oil.

One bite reminded me of Santa Fe for a second, perhaps of the drinking chocolates at Kakawa Chocolate House. Perhaps it's that combination of less usual flavors (like juniper) that created that old world feel (though I don't recall any of their chocolates having juniper specifically). Either way, likely it is the juniper that gives the chocolate that unique flavor because juniper is something that you come across less often in chocolate (I do believe I've had it in chocolate before, or at least something similar).

And while I did say that there was no alcohol taste to this chocolate, a couple pieces in, I did start to get an aftertaste that reminded me of drinking an alcoholic beverage. That sort of zingy, deep flavor. So while I can't say if this chocolate specifically evokes a gin and tonic, it is interesting. Likely, as well, the flavors would have been better and more pronounced if I hadn't let this sit on my shelf for months before opening it. I'd say the chocolate itself is fairly standard good quality--and being able to put together something nice with a "stranger" flavor combination is an achievement for Coco Chocolatier. I'd be interested if someone offered me more from them.
Posted by Deanna Skaggs at 7:25 PM