The Voice of Snow

I think I mentioned getting a record player a few months ago. It makes me feel cool because music truly does sound different--and now when I'm out doing my antiquing, I can take a look at the records, too, because they're now relevant to me. 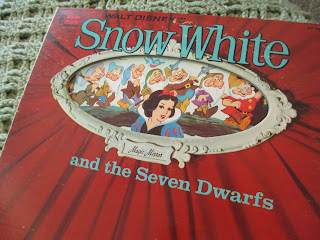 Like the stack of Disney records I came across yesterday. Mary Poppins and Bambi and Peter Pan. I took the two I liked best, Snow White and Cinderella (if only they'd had my dearest, Sleeping Beauty). The latter mainly for "So This Is Love" and the former for "Some Day My Prince Will Come" and "One Song." They are in fact more than just songs. Each record also comes with an illustrated storybook and the audio contains narration in addition to the songs. Kind of nice if you do want to put them on for children or even for yourself while doing housework or something. But a little inconvenient if what you want is just to listen to a specific song (there are no marks in the records themselves that show the breaks between songs like usual since the narration makes it all just one continuous audio piece). 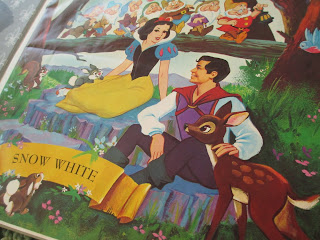 It isn't too hard, though, to find each one since you do know at what point in the story the song you want comes in. And oh, is it lovely to hear these songs in this way. (The records, by the way, are from 1960.) 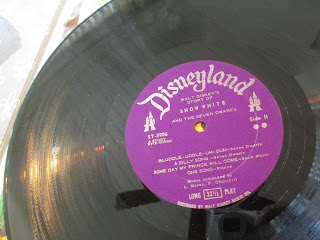 Snow White and the Seven Dwarfs I have said many times is as near to perfect as is possible. Disney did something amazing with that one. The combination of Grimm's with the 1930's with Disney just hit it right. And so you put that dark and yet hopeful music and Snow's child voice into a record player and you just have something special. You're transported.