In the Queen's Shadow

You know, I never feel like I share the experiences of people who talk about the role models that Star Wars characters were to them while growing up. Except that, the more I think about it, the more I think that Padme might just have influenced me more than I realize. After all, I was about eight when I watched The Phantom Menace and we watched that movie quite a bit in my house--being that we didn't own too many movies and being that it is, after all, a good movie (not perfect, sure, but few movies are). One of the great things about it is the introduction of two great Star Wars female characters (a topic which is talked about so much for characters coming out now): Padme and Shmi Skywalker.

While I must reluctantly admit that there will probably never be a book about Shmi, at last we got a book, Queen's Shadow, about Padme. A book written by E.K. Johnston, no less. How exciting is that? 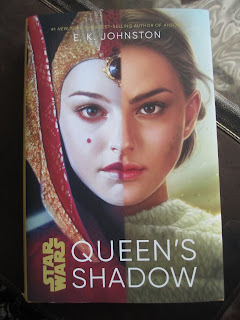 I keep talking about reading or watching things at either the right or wrong time in one's life. When I was maybe a third in, I thought maybe this was a bad time to be reading this book--for reasons I won't get into. But then the reasons changed and developed and it became quite a fitting time.

The title refers to two things. There is the plot. Padme is shifting from her role as queen to senator and adjusting her approach accordingly. What worked when she was queen doesn't when she's senator, so she has to get out of that shadow even while using what she gained from it. There is also Sabe, her closest handmaiden (and her main body double aka. Keira Knightley in the movie). Much of the book is from Sabe's point of view, not just Padme's. So you have this character who is freely choosing to live behind this other person, to literally become her when needed: she is living in the queen's shadow.

The book answers many questions--or rather fills in many details. The shift from Padme in Episode I to Episode II (why does she act so different?). The elaborate costumes. The handmaidens. Simply Padme's voice in it all. The movies show what they can, but they're not from Padme's perspective, so I think a lot is left to the audience to infer--and some audiences maybe don't quite bother to go into her perspective. So this book shows what types of things go through her head.

It's so funny. I'm going from realizing that maybe this character did influence me to realizing that we have much in common. Not . . . everything about her. Just certain things, certain things that reading this book made me ponder. And I guess this was kind of a pondering book. It wasn't so much about plot as about that transition that Padme made to being a senator. So it has all of the thoughts she has about her past, present, and future. While politics make up a certain percentage of the plot, E.K. Johnston has that talent to bring everything right back to character. It was all about the characters and not about the political plot points. Interestingly, as well, this book shows Padme apart from Anakin, during the time that she didn't seem him at all and so only thought of him rarely and in passing if at all. That's quite important. Much as I like Anakin and Padme, all this shows that she was her own person before their relationship. It makes her eventually "fall" more a tragedy that happened to her than something she brought on herself.

If Padme didn't bring the fall on herself, even if it did come, maybe I won't, either.
Posted by Deanna Skaggs at 7:24 AM