The Death of Kings

Heading over to see what Southwest Shakespeare Company has going on at Taliesin West always turns out well. The Death of Kings: Seize the Crown was performed by a group from UC Santa Barbara's Department of Theater and Dance. The play itself combines eight of Shakespeare's history plays, only one of which I have watched. 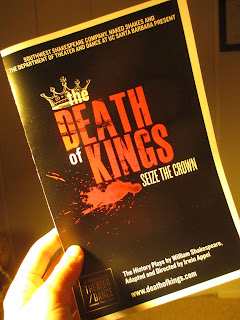 Frank Lloyd Wright's little theatre up at Taliesin is already such a strange (in a good way) spot to see a play. This played used the space differently, bringing the back "wall" of the stage farther back than in the other plays I've seen there. The other plays have had small casts, usually just a few people. This one had a little over a dozen. So they did need a bigger physical space--and yet they were still in the smaller physical space of the theatre itself.

I talk about space because this production emphasized the use of space and visuals. They had that not-quite-abstract, artistic approach. The same wooden poles in the hands of the cast could represent either the swords of the battlefield or the wood that burns Joan of Arc. The physical passing of the crown from one monarch to another was a theme in and of itself. And red light or red hands or red cloth, well, I'll let you imagine that. It was all done in a fluid way, though. Sometimes such an approach can feel like the actors are pretending to show something happening; but the approach here was, instead, a direct representation of what was happening.

Although the cast was on the bigger side, most were playing at least two or three roles, in addition to being part of the ensemble. The 90 minute play, after all, puts together eight plays. The whole play, then, was much about the overall concept of changing thrones and yet also about each moment. In this moment, this actor is this character and they are playing out this scene, even if they were a completely different character in a completely different scene just a minute ago. In this way, they took the pressure on themselves instead of putting it on the audience: we were free to just sit back and watch it all unfold, not needing to worry about keeping track of who's who or what's happening. Indeed, the carefully placed snippets of narration also worked to provide whatever guidance the audience might need.

All of these pieces of plays came together to create something dark and dramatic and exciting and funny and thoughtful. The concept of different generations falling and rising brings up questions of what we are doing in our own time, or how the present would look as just a single strand in a whole stack of events. What would you choose if you were being watched in the pages of history?
Posted by Deanna Skaggs at 7:16 PM