Someone tell me, why do I keep bending my chocolate rules? This chocolate says nothing about being fair trade; it just says it's non-GMO (which is good) and suitable for vegetarians (which most chocolate should be, anyway). But it's from World Market, it says it's handcrafted in England, and it's a banana chocolate. So I bought it. 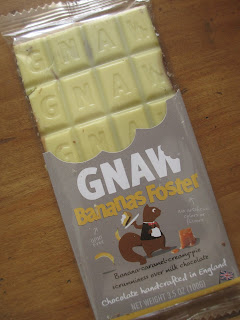 The overall style is casual. The bar comes in two layers, white chocolate over caramel chocolate (or 33% milk chocolate). It smells as you'd expect, like cream and banana--specifically that banana flavor that isn't one hundred percent true. More of a banana flavor than the flavor of banana. The ingredients do list "natural banana flavor," but I would imagine that could mean a variety of things.

You know what it tastes like? Duvalin candy. You know, that Mexican candy that has the little plastic dish and a plastic spoon to scoop out a creamy paste that's some combination of brown, pale yellow, or pink. I don't entirely know why, but I love that stuff--so I'm also loving this. The resemblance is strong, though this chocolate isn't as plastic in texture as the candy is--and certainly it should not be. 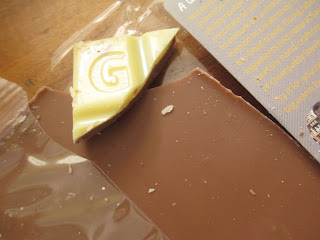 I can't exactly offer much more praise than to say that I like eating it. It's a sweet confection flavor of somewhat faux-feeling banana along with cream and caramel. Caramel that is almost more of a toffee flavor or a hard candy caramel. It's all super sweet and gets a bit greasy and there isn't anything to note about the chocolate. I've also had better examples of banana chocolate.

And yet all of the things that I want to call less than perfect about this chocolate are what make me enjoy it so much. Well, if we like some things that logic would convince us are not for us to like as much as we do, well, I suppose that's okay. I don't expect to be buying anything more from Gnaw just because they do bend my rules, but this bar is certainly disappearing quickly. So if you don't have my rules and you want a chocolate banana confection, go for a try.
Posted by Deanna Skaggs at 5:34 PM