I always end up stalking that little owl wearing a cape and hat--because I love it but I don't collect plushes and sometimes you just really need to stick with rules of what not to buy.

For those confused (probably everyone), the little owl is the one from Sleeping Beauty. When Aurora is in the forest recounting her dream, the animals find Philip's things and hold them up to create the companion Aurora speaks of, the physical "person" she can dance with. The owl wears his cape and hat while the rabbits take his boots. And then, of course, he discovers them all and takes the place of the animals in order to sing back to Aurora's song. 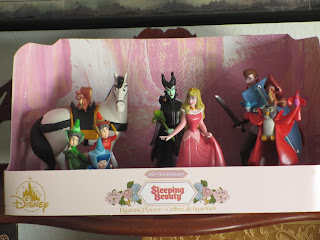 I was there in the Disney Store, holding that plush once more and saying that if they just made it in a figure instead, I would buy it. And then there it was, a figurine playset celebrating the film's 60th Anniversary that contained the said beloved owl. Aurora and Philip and Maleficent, et all, as well, but the owl was the one that made that set mine without a blink. Ah, I love the 60th; it also brought me a wonderful set of pins last month. 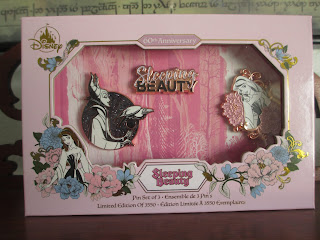 Sleeping Beauty is one of my favorite Disney animated films. I loved it first because I got the DVD on a trip to Disneyland, then because I loved the art and the music. Then I loved the good versus evil theme. And the way in which Philip fights for Aurora, the way that he loves her even when she's just a random girl he met in the woods, not a princess. The way that she dreams of him and then meets him. Provided you go along with the idea that it is a piece of art rather than a description of the reality of meeting and falling in love with someone, it is a beautiful piece about love. And about good versus evil. I'm all about the good versus evil stories.

Maybe the two, the love story and the good/evil story, combine and that's also why I love this movie. There is that two-sided element to all of it. Darkness in Maleficent and her abode and the thorny shadows she brings to the kingdom. Beauty in the jewels and the castle and the living forest and in Aurora herself. Feminine elements in Aurora, the fairies, the dancing and the singing. Masculine elements in Philip, the sword fighting, the dragon, the flames. A balance between two opposing, complementary elements.

Oh, and a little owl wearing a cape and a hat.
Posted by Deanna Skaggs at 7:05 AM