When the Phoenix Symphony does something like performing the score of Star Wars live to the movie, the idea is usually that they're going to be bringing in an audience that doesn't normally go out to symphony hall. While granted I've never gone to one of Phoenix Symphony's own productions, I've hard them many times (for operas and ballets) and I've been to Symphony Hall many times--but this was the first time I had been to see a movie score live. So kind of opposite for me. 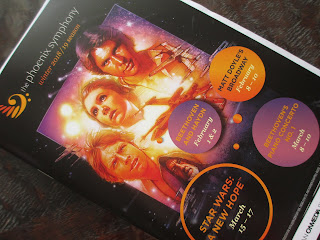 The concept had always seemed novel, definitely something I wanted to do at some point. I found out about this one kind of late on and thought, you know what, this month is the month of show after show for me, so why not just go for it. I highly recommend doing the same if you also have the opportunity to see a movie score you love live.

It's exactly as amazing as you would think that it would be. I've never seen A New Hope, so seeing it on a bigger screen and with an audience was nice--but also meant nothing compared to what it was to hear that music live. The sound is different when you see a movie like this because you're not really there to watch the movie. So the music is louder and the rest of the sounds of the movie are somewhat quieter than they would be in a movie theatre. You can still hear the dialogue and effects, etc.; it's just that the score takes center stage.

Visually, as well, yes, the screen is big, but it doesn't take up your entire field of vision like in a movie theater. And instead of performing half in hiding like they would for an opera or a ballet, here the symphony was set up on stage. The conductor had his own smaller screen in front of him to show the movie along with the "moving target" to help him maintain timing. That's the amazing thing: they have to stay in sync with the movie that is playing on the screen.

That this score in particular is a powerful score we already know. I perhaps needn't stress that. I'll just say that yes, it is indeed strong and triumphant and tender and soft and exquisite and bold and touching . . . and powerful. And hearing it live only makes it more so.
Posted by Deanna Skaggs at 7:21 PM