On a Silent Night

Probably you have heard the story of how soldiers during WWI laid down all hostilities for one day, for Christmas Day, and intermingled and played games and acted as friends and comrades, and even though they went back to fighting the next day, for that one day, Christmas Day, they had put all of that aside. 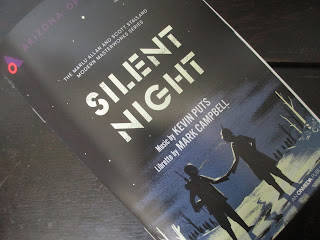 This is the story that Arizona Opera's latest production, Silent Night, was based on. That is, the opera, with music by Kevin Puts and libretto by Mark Campbell, was in turn based on the film Joyeux Noel. Perhaps that was why the piece flowed along much like a film would rather than an opera. Even though you could sense that the audience was moved, there weren't any gaps that allowed for the usual pauses of applause that are the norm for opera (opera audiences love to show their appreciation). In fact, that was just as well: pauses and applause would have removed the audience from being inside the story and this was one of those pieces that just pulled you in and kept you within the world.

Also seeing soldiers and bits of battles was different from usual at the opera. But still we had the main thing: music and singing that moved us emotionally. I've talked about maybe the shedding a tear thing at an aria, but the first act of Silent Night pretty much just had me weeping. This is where I start to wonder again if it's just me--except that this music won a Pulitzer Prize, so no, it isn't just me.

The story is war . . . and war stories are about people who are coming from all phases of life to a horrible existence. The mothers, the fathers, the children, the friends, the lovers, they all got their moment, each moment a chance for the audience to connect and weep at the idea of what that would be like--that is, for those of us who have been so fortunate as to not experience events quite like this. For those who have, well, that would be even another layer.

The performers in this sang the song of life . . . of heartbreak and pain and beauty. That's what made this opera so poignant. I will state that, while the first act just left me utterly stilled, the second act didn't have the same power. I would rate the piece as a whole higher if there hadn't been that difference between the two. Still, though, Silent Night remained a beautiful story of the deepest and most touching aspects of living.
Posted by Deanna Skaggs at 7:27 PM