The Marriage of Figaro

Nice as it was to see The Barber of Seville last year and then its sequel, The Marriage of Figaro, this year, I quite honestly probably just wasn't in the mood for such a lighthearted story on that particular day. 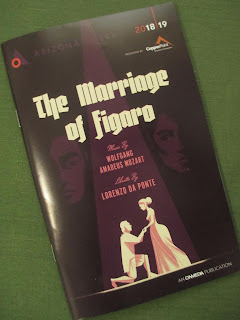 The story is full of fun comedy--and a little bit of iffy comedy. Yet it was when the Countess (performed by Katie Van Kooten) was singing about wanting her love to come back to her that I was all bawling. It brought somewhat to mind Madama Butterfly. I do prefer the melodramatic, don't I? Give me three hours of lighthearted comedy and all I latch onto is the touch of pain.

That's how art is, though, isn't it? You can sit an audience in front of the exact same show and we're all going to come out with different experiences. That's why so often art will feel like it's speaking exactly to you: once it's unleashed on the world, it becomes a mix of what the artist gave it and what the viewer gives it.

Posted by Deanna Skaggs at 6:59 PM