I have mixed feelings about Little Secrets. In the past, I've shown a preference for the their chocolate pieces versus the crispy wafers and the cookie bars (aka. the M&M's versus the KitKats and Twix). Today's product, the Nougat + Salted Caramel Creamy Nougat Bars in Dark Chocolate, are obviously modeled after (American) Milky Way bars. 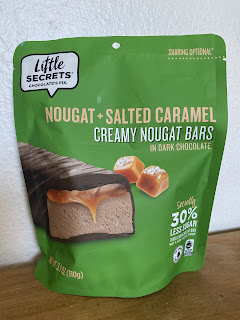 I know they were trying to cram in as many appetizing words as possible, but perhaps they could have come up with a shorter name? Or did they just assume people would say, can you buy some of the Milky Way Little Secrets candy from the store, as opposed to, could you get me some of those Nougat and Salted Caramel Creamy Nougat Bars in Dark Chocolate? They managed to find short, knock-off names for the other products, so why not for this one? 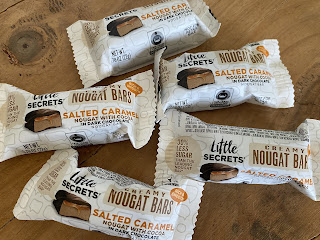 As per usual with Little Secrets, the style of the packaging is basic to have wide appeal. Bold green can mean marketing towards children--but it also works for adults. The look is casual because this is just candy, but it's also a fairly clean look without a lot of words or graphics going on. I was a little disappointed to find that there are only five mini bars inside the bag. At 22 grams each, they are a little bigger than most fun size candy bars, but after buying a whole bag I was expecting more. (No, I didn't look to see how many were in it before buying. I was going to want them to review, anyway, so I saved my analysis for later.) 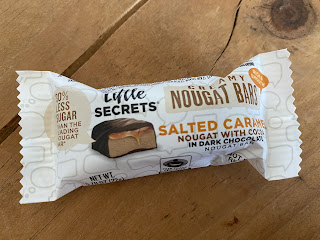 The individual packaging is more chaotic--a little less decisive about what angle it wants to take. The white background is more neutral, but there are a lot of words crammed onto the small wrappers. I'm guessing that the discussion/thought bubbles in the background are meant to look trendy and hip, but they just add to the chaos. Something simpler and more distinguishable would have worked better. 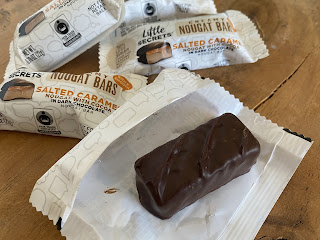 Unsurprisingly since this is candy, the chocolate is a fairly light color for being dark chocolate. It's probably just a breath away from being milk chocolate. And without milk to bulk out that percentage, we know it still has plenty of sugar in it. So I really don't care about the claims that these have 30% less sugar than the leading nougat bar. I can monitor my own intake of sugar. If something has more, then I eat less of it. Tangents. 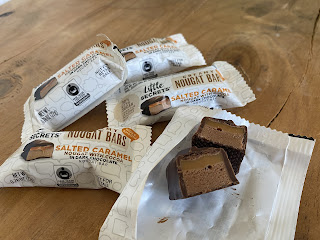 As you can tell from the picture, the caramel is thicker in proportion than it is in the picture on the packaging. And given that it's quite a dense and chewy caramel (dare I say it it even gets close to the caramel in Rolos?), the texture here is much stiffer and stickier than I remember Milky Ways being. It's difficult to get any of the nougat on its own, but when I attempt to, it does appear to have more substance than the standard type. It's more flavorful and a tad chewier, less airy. So it probably also contributes to the denser, chewier texture. This isn't necessarily a bad thing--and of course most people probably aren't analyzing candy this much. While the stiffer texture of the crispy wafers was too much to satisfy a KitKat craving, this one would work well enough as a Milky Way replacement.

As far as the dark chocolate, it doesn't make much difference to me. It's a sweeter type of dark chocolate to fit the scene, and it is only a small contribution to the overall flavor. The caramel and nougat take the front seat. I don't see what they mean about salted caramel, other than trying to make it sound cool and trendy and more "adult." I don't taste any particular salt.

Little Secrets makes a big deal about having better ingredients than other chocolate candy. I appreciate some attempt at fair trade cocoa. And their palm oil is marked as being sustainably sourced. I'd prefer not to have palm oil at all--but it's hard to create that familiar chocolate candy without the familiar palm oil, butterfat, and glucose syrup, isn't it? Not having corn syrup is nice. Unless I'm mistaken, Milky Way has egg whites, and this version does not. Including them probably would have made the nougat fluffier, though the inclusion of cocoa in the nougat itself does contribute to its stronger flavor. I guess I still feel like the real little secret is that these might be a step up from standard candy bars--but that's a low level to beat, which means that these still aren't too much to boast of. Again, not that I necessarily mind. It's candy. I can monitor my own candy intake. If it's a little cleaner, I'll avoid it a little less. And I'll let it fill that sugar void every so often when the sugar worms make their demands.