Whispers from a Fish

Okay, I'm sorry. I was overgeneralizing when I said I didn't like Asian food. By that standard, I don't like any type of food. I'm going to be picky--or as someone once kindly said, selective--wherever I go. But that doesn't mean I need to generalize against entire continents of food. Noodles and veggies, I can eat that. It's the seasoning and sauces that tend to be too much for me. But I can handle a bit--and there is such thing as growing accustomed to certain types of food, as well.

Well, when they sucked me into a Thai restaurant, I played it safe and got a Chinese dish. (And found it funny that I was the only one who said I like Indian food when everyone else thought that Indian food was too much. Strange.) I somehow survived going for sushi by getting a veggie roll and potstickers. And then a Korean place (the H Mart food court) was next. What do you do when in the face of a million dishes you've never even heard of, most of which contain ingredients you don't even like to eat?

Ah, well, I have a hard time choosing, anyway. So this just narrowed it down to me. Which dishes are made with chicken? Very narrow selection. Which doesn't sound too scary but also sounds like something that is specifically Korean, that I would only be able to get here? So I made a choice--and it was fine. I don't know that I'll crave it, but I could eat it again. So why my fear, why my overgeneralization about not liking Asian food? I coaxed myself in and realized I can find something to eat in most places where I go. I dived into the ocean and came back up to the surface. 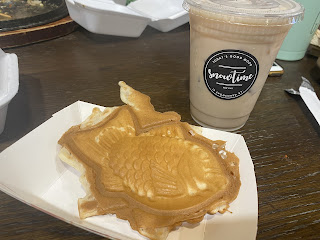 I dived in just like this little fish friend here. I'll have to hand it to Koreans, their golden fish breads are unmistakably cute. Though turkeys are my animal of choice, I do get excited over fish-shaped things, too. And I much prefer the Korean fish dessert to their savory fish cake (which, okay, I tried, but I failed to see why I would want to sprinkle potent fish onto my food--don't we in the Western world usually cook fish in ways to make it less fishy, rather than trying to make non-fish foods taste like fish?) The bread was nice and warm, filled with your choice of filling. I went boring with custard because that sounded like a safe option. I don't think I care for red bean (I'm from the Southwest, not the South--beans shouldn't be sweet). So the fish bread was a nice, pleasant dessert.

And then there was the rose lychee milk tea. It also comes in just rose, rather than rose with lychee. I was overjoyed that the rose flavor was nice and strong. I do love rose, as I've said before. I would go back just to get this drink. I suppose I did also try a bit of a beautiful matcha and taro ice cream. Maybe I wouldn't mind getting more matcha ice cream. I don't crave ice cream often, but I might be more inclined to crave matcha ice cream.

So maybe the dessert is where it's at for me. I guess that's what comes from poking around and trying something new. Don't be so quick to generalize (I'm sorry, I'm sorry, black and white thinking just comes so easily to me sometimes) because you never know what you might find. At the very least, maybe you'll find some fish bread.

Posted by Deanna Skaggs at 8:28 AM