It's really quite terrible that I've never been to the Peterson House, which is basically the only Victorian house left in the Phoenix area besides the Rosson House in Downtown. So I was looking up to see when they're doing holiday tours this year, and what do I find on Tempe's website? The Eisendrath House. Tour days were only listed at a few a year--with one coming up that weekend. So I betook myself to the Eisendrath House posthaste to see what I could see. (The next tour day is coming up this Saturday 11/12/22.) 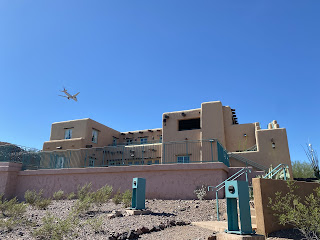 The home is a little newer, built in 1930 in the Pueblo Revival style. It's also passed through many hands over the decades. Unlike the Rosson House, which received quite the impression restoration, the Eisendrath House has simply been rehabilitated. The house that you enter now is, then, not entirely like the house you would have entered in 1930; it's simply been put back on its feet, not brought back to its original state. What I didn't know is that the city has recently taken over the house; the day that I went was the first day of their tours. So they're still fairly fluid as they settle in on a tour structure and learn what we want to know about--and learn more about the house. 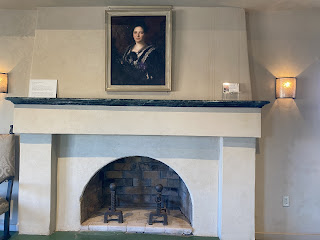 While I generally consider myself a Victorian at heart (so even the Rosson House leans more towards the 20th century), lately more things have been drawing me towards that general 1930's era. While the wild 20's rocked away the last vestiges of the Victorian era, the 30's did have a certain classiness to them. And what was still considered a little wild in the 30's is considered classy today--like music, or even clothing. So I enjoyed sitting (figuratively) in the era of this house for a bit. 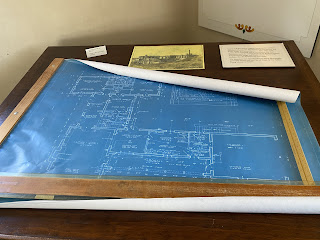 There isn't much furniture in the house at the moment and, of course, nothing that was originally there. But what is there is enough to give that impression of the types of things that would have been in it in 1930. And that, too, I enjoyed. It's a Pueblo Revival style home, but Rose Eisendrath didn't furnish it in "Santa Fe style" or "western" furniture like we have today. She seems to have furnished it in the type of furnishings she would have used for any of her other houses. I do like that concept. If I were to move into a pueblo/western/Santa Fe style house, I could still put my Victorian-esque furniture and decor inside. If I were to move into a really modern, clean lines, lots of glass sort of house, I could still decorate it with my Victorian trinkets. I like the idea of keeping the style of what furnishings and decor you have for as long as you can--and fitting them into whatever style of house you are in. It doesn't detract from the style of the house itself (necessarily--I know that's a broad statement), so long as you're not actually altering the structure of the house. If there are beautiful wooden vigas/beams, for instance, don't paint them or cover them just because they're not your style; let them be and put your style in the furnishings. You can work in some details to connect it all--like, in this case, maybe some pottery. But I like the idea of bringing styles together (okay, which is also why I like the Victorian era--they loved juxtaposition).
I ramble. But my point (rather than to tell you exactly what I saw or learned from visiting the Eisendrath House) is that visiting these places makes both for a wonderful way to spend an hour and for a great conversation starting point. It's always intriguing what speaks to each of us, what inspiration we gained from visiting the same little spot.
Posted by Deanna Skaggs at 9:12 AM