Since moving back to the Phoenix area almost six years ago, I've been trying to enjoy the things the city has to offer, like the arts. Arizona Opera, Ballet Arizona, Southwest Shakespeare Company, Phoenix Symphony, Arizona Musicfest, the Mesa Arts Center, the Orpheum Theatre, Herberger--there's plenty to keep busy with show after show. So up until last month, I had never attended a performance from Phoenix Theatre Company. 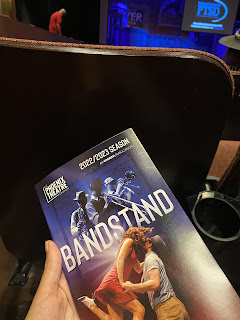 If Bandstand was anything of an example of the quality of their productions, I've been missing out. (Granted, Phoenix Theatre Company tickets also cost more than some of the saver ticket options for other companies, though they do offer lots of promo codes.) This musical was at their Mainstage, which is a relatively small venue. Yet the production was full--music and choreography and singing. Even towards the back, you're close enough to enjoy the detail of it all.

The story follows WWII vets trying to make their way back into society after the war. We also focus on Julia, the war widow trying to have an identity besides just being a war widow but also trying to find closure for the loss of her husband. And the way in which their story of "coming home" is told is quite unlike any other. Their PTSD, their lingering issues (whether physical or mental), their fears, their memories, what sets them off--it's all thrown in within the story. We don't see the innocent young men before the war, then the haunted men after the war, and then some sort of third act event that brings it all to a climax, then the resolution. That is, we see all the stages of the story told in the musical. But we don't see those stages in the characters' lives. We come to understand that for them, there is no going back, no coming home (in which I inadvertently take some of Frodo's words--which I suppose is fitting given that Tolkien wrote his story after his experience in WWI). They'll always carry the war with them; the sacrifice wasn't just in the time spent overseas but in their whole lives. It can't ever be "just like it was before."

So the story itself is incredibly moving. And the performances matched the material.

Having dabbled in swing dancing in the past year, that swing era now has a little bit of connection for me. So it was nice even just getting to hear all the music and see the choreography. This is one of those musicals that flows from one song to the next; the beats keep moving. Swing makes for a wild and reckless abandon to energy that tries to stave off the pain of the war--and audience-wise, provides levity towards the serious material. Somehow this musical acknowledges the depths of darkness while also not being depressing. That's what art can do, though, no? The darkness is made into an elevated view of reality--by both the band in the musical and by the musical itself. Art can heal not by taking away the pain but by giving it outlet, giving a place to state the truth in full force in a way that you couldn't in any other way.