There essentially remain two Victorian homes left in the Phoenix area: the Rosson House in downtown and the Petersen House in Tempe. The former I have great familiarity with, but the latter I had never been to up until this past weekend. It was high time. The trouble with visiting the Petersen House is that it isn't open very often. You can catch it this December, all decked out for Christmas, on weekends between eleven and three. 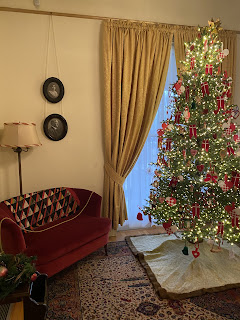 The comparison and contrast between the two Victorian homes is fascinating. The Petersen House was built just a couple of years before the Rosson House. Its rooms are bigger, though it has perhaps slightly less of them; I wonder if the square footage of the two isn't about the same. The Petersen House seems bigger, but then again the staircase does take up quite a bit of space in the Rosson House. The Rosson House has quite a bit of elaborate wood details (and those beautiful ruby glass transoms), but the Petersen House has delightful details, as well. Stained glass in a couple of places and little reflective corners on the stairs to help to be able to see each step in limited light. 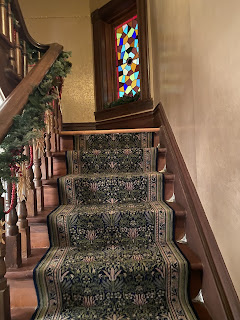 Furnishings are nice, as well, in particular the master bedroom set. And the stove in the second bedroom. And the milk glass lamps. The upstairs floor seemed to have more trinkets than the downstairs, no? The parlor/living area downstairs was fairly plain for a Victorian home, perhaps to allow for the Christmas decorations. 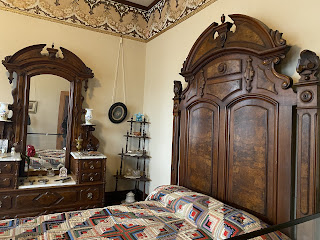 I'm less aware of what the restoration for this house was like. The Rosson House had an extensive restoration because it had been changed so much--but has been brought back mainly to its original state. Because the Petersen House didn't change hands so often, it seems not to have had quite the same experience. It did, interestingly, receive some changes to the outside at least after the 30's: poplar styles changed then just as they do now. So Victorian elements were changed to Craftsman Bungalow style. It gives the outside of the house a particular look today: Victorian bones combined with those distinctive Craftsman columns. Here we also have a chance to see what the Rosson House almost looked like; the brick is painted red, which they started doing for the Rosson's restoration before they figured out how to safely removed the white paint to expose the original brick. The extra paint adds to the dollhouse look, which furthers the contrast with the Craftsman porch. 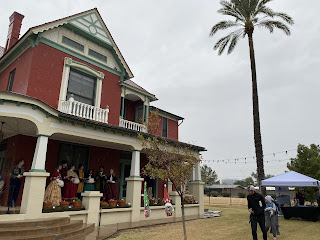 It's quite a fun house to explore and a definite must if you live in the area or happen to be visiting when it's open. I do love a cozy Victorian home, especially cozy on this rainy weekend we just had.