Apparently Stone Grindz had some eggnog holiday truffles this year. I've probably missed the window of opportunity for those, but today on the eve of Christmas Eve I bring you to you their Halloween Limited Release, Peanut Butter Cup, which is made with a 55% cacao chocolate. I have not in fact been sitting on this chocolate since Halloween; I did get it much later. Still, I realize that I almost put up this review of Halloween after Christmas--so perhaps an apology on tardiness is still in order. 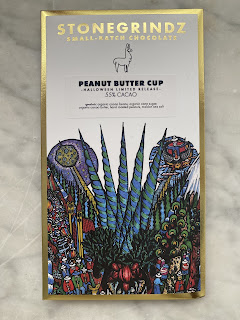 Usually when I review Stone Grindz chocolate bars, they're just in the clear sleeves that they sell them in at the farmer's market. This one is in the full card box garb, which I normally don't get to admire. Stone Grindz may be so micro batch that they don't even have a store front, but that doesn't mean that their quality is any lower or that they only have a handmade, brown bag look. Clean white makes a base for colorful artwork evocative of the cocoa-growing countries, while gold highlights add class and luxury. The card box folds out to black and white photography of cocoa production and the scenic Arizona desert. I like it for the local element, tourists to Arizona can enjoy it for the same reason, and anyone who has this chocolate delivered to another locale can revel in the exoticness. 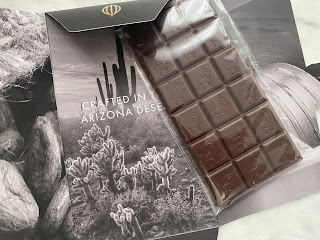 Inside, the chocolate bar sits in its familiar clear wrapper. I do appreciate that these are resealable: the inability to reseal is normally one of the disadvantages to most non-foil wrappers. The chocolate's face has the familiar alpacas all lined up in rows and columns. On the back, though, I found some unexpected sea salt chips--that would be the Maldon sea salt mentioned in the ingredients. Salt is, after all, a key element in Americans' perceptions of how peanut butter chocolate should taste, thanks to Reese's Cups. 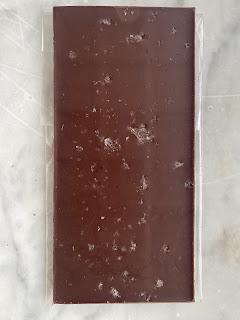 One bite of this chocolate and I saw (or tasted) why I jumped at the opportunity to get this chocolate bar, even though I knew I was going to get to it far after its Halloween label. It's the same type of style as their Almond Butter and Black Lava Salt that I looked at this spring. That is, the peanut butter element is just mixed right in with the chocolate. Yet it tastes distinctively like peanut butter and semisweet chocolate, along with a dash of salt. The infusion is incredible. 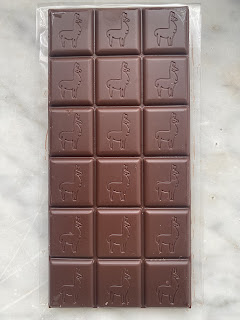 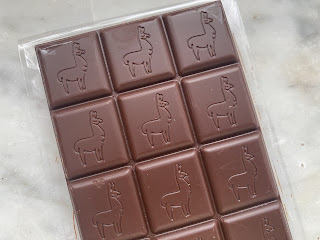 The chocolate is a little sweeter on this one, a little less dark. So it's a little more casual perhaps. But still wonderful in its own right and not sweet in the standard sense. It's still quite elegant. Combined with the peanut butter element and that lovely salt, it's magic. That's what this bar is: pure magic. I can picture it pleasing a wide variety of palates. And the limited ingredients mean wider appeal, as well. So if the flavor ever shows up again or next time Stone Grindz decides to play with nut butter chocolate, I highly recommend giving it a try.

Posted by Deanna Skaggs at 7:37 PM