Too much time has passed since I covered anything from Stone Grindz, and the local Scottsdale company has certainly kept busy during that time. Today we're looking at their Almond Butter & Black Lava Salt 80% Dark Chocolate bar. This one came in a simple clear sleeve that showcases the alpacas on the squares. What could be cuter than eighteen almond butter alpacas? 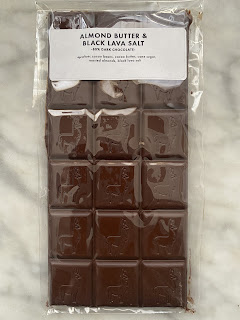 The chocolate has a rich semisweet aroma. Although it is a tad darker than it appears in the pictures, the chocolate is fairly light for having an 80% cocoa content. We'll find out why soon. I also noticed that the texture when I broke off a square seemed soft, which I first attributed to the warmer spring weather (even though I suppose it's still cool indoors). You can see I hadn't thought too much about how the almond butter and black lava salt would manifest. Because the next thing to notice is that there are no visible almonds nor salt crystals. 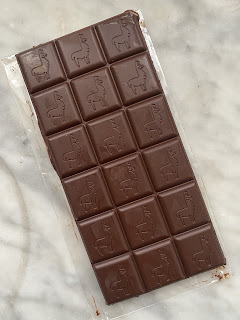 But the label says almond butter not almond slivers, you say? Well, often there is some room for interpretation when it comes to labeling chocolate bars. Like with all the chocolate bars that say they have caramel in them only to reveal crunchy, toffee-like candy bits inside. So I could see opening up an almond butter chocolate bar to find slivered almonds within its depths. After all, does the thinness of a standard chocolate bar give enough space to fit in a layer of almond butter Reese's Cup style?

Not really, unless you do little pockets in each square like Ritter Sport does. What we have going on here is much more interesting--especially since I believe this is the first time I've come across this approach. The chocolate feels so soft when you break into it and when you put it in your mouth because the almond butter is mixed into the chocolate. And the salt is brought in, as well, versus just sprinkling it on top. Sit and ponder that for a minute. 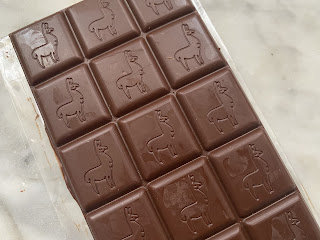 The texture is like chocolate but softer and smoother--but not in a plasticy way. You can tell it isn't from added oil (even coconut oil), which gives a different sort of smoothness. This makes your mind do a double take. Is it like ganache? Like a chocolate nut spread? That last one really does hit it. And again, I mean a chocolate spread that does not contain oil (like Nutella does). This feels more pure and also richer. And more flavorful.

The salt acts as a seasoning to it all. You don't get hits of salt flavor like with some chocolates, but the salt's presence is definitely known from the moment the chocolate hits the tongue. The black lava salt has an added depth of flavor, but is not too strong or too sharp. It adds to the overall feeling of this chocolate bar being familiar and yet also very different.

There was a moment where I wasn't sure what to expect from this bar. I just knew I wanted to try it because I've had some pretty great Stone Grindz chocolate before. And this one has left me quite floored, in a good way. The texture and the balance of the three flavors combined with the purity of ingredients is a major win. The fact that there is depth from the darker chocolate and yet also a kind of sweetness and mildness from the almond butter means that this will also appeal to a wide variety of palates. And of course there is no milk here, for those to whom that's important; in fact, this is my probably my favorite non-dairy, nut butter chocolate. It reinterprets the concept in a way that feels completely approachable.

Posted by Deanna Skaggs at 1:09 PM