The Tempest in Our Hearts

Although they were back doing live shows last fall, I haven't had a chance to watch any of Southwest Shakespeare's current season until seeing The Tempest last week. It's playing in repertory with Farinelli and the King until March 19/20. 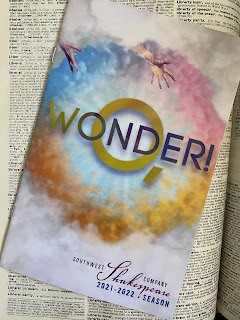 I'm familiar with some of the basics of The Tempest, but this was the first time I had seen a full production. It's quite grand, jolly fun, isn't it? I tend to prefer the tragedies over the comedies, but this one follows a slightly different tone than is most common with the tragedies. Sometimes the comedy is all about innuendo; that wasn't as much the case here. And with the addition of magic, the plot has a wonderfully random quality. People drop in here and there, setting up a series of little tableaus in which we can focus on separate elements one after the other.
Then also we have some heavier concepts within the themes. Director Ingrid Sonnichsen's notes in the program explore the idea of forgiveness in the story. Most specifically she refers to Prospero's forgiveness of his brother and the freedom it gives him from isolation. That's great. We can look at the island as a sort of metaphor for how we try and deal with the circumstances we have faced in life. Prospero, with the help of Ariel, is messing with the people he used to know and making them turn this way or that. He's trying to manipulate circumstances in the way he wants--which compares to the past, in which he was, you could say, a victim of circumstances. But along the way of playing with the magic of this island, he comes to realize that he doesn't need to play the game anymore.
There is a line in the play that I wish I could quote back. It was about love, about how love should stand fast through all circumstances or storms. At least, something to that effect. That's terrific. It connects to forgiveness, too, because of course as people we all fail one another in one way or other at some point; love needs to be willing to accept that and endure through it. We agree to work through the difficulties rather than to run away. We face the tempest head on.
Though simple, the set effectively put us on the strange island. I particularly like the way in which the draped strips of cloth at some point in the play lit up with lights. It added to the otherworldly, anything-can-happen feeling. For a chance at escapism and for a dive back into Southwest Shakespeare after a long break, The Tempest hit all the right notes.
Posted by Deanna Skaggs at 10:38 AM