Belvie marks another new chocolate company for me. Founded in 2015, they are a fairly new company. The further uniqueness, however, lies in the fact that this is chocolate sourced in and made in Vietnam. I believe those are both new to me--Vietnam is not a common cocoa origin. One of the founders of Belvie is from Vietnam and the other from Belgium. The bar I'm looking at today is the Lam Dong 70%; the cocoa beans are trinitario variety. 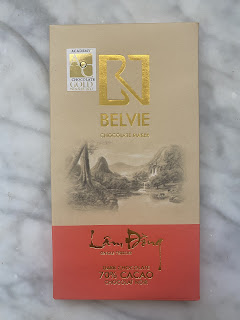 Even with the orange accent, the packaging is sleek and neutral, yet still leans toward a traditional versus modern look. The pale color is reminiscent of unbleached paper of the past, and the lush landscape image reminds me of the Romantic art style. And yes, you can also see on there the Gold award from the Academy of Chocolate Awards in 2017. I take a Gold recommendation from them seriously. 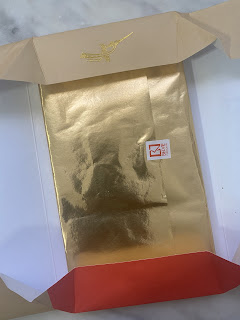 Unwrapping the paper reveals a golden bird on the inside, which is a nice touch. So also is the small sticker that seals the inner paper shut; I can't remember when I've come across a seal like that before. The mold for the chocolate bar is great, as well. There is such a simple and sleek look that it doesn't immediately jump out as being different. Yet the way in which the squares form a radiant burst from the logo in the center is indeed a unique look. With a chocolate bar like this, when you break pieces off they're not necessarily going to break along the design lines. So you can just choose yourself however small or big you want the pieces to be. 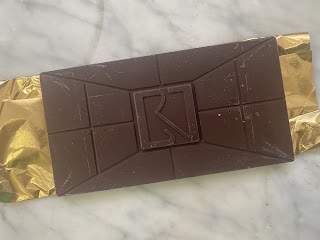 There is the slightest hint of bitterness to the chocolate's aroma. Instantly the flavor is warm and sweet with richness. At first I wanted to call one of the flavor notes I was getting perhaps either nutty or woody; it wasn't one of the more common flavors. There is also an underlying hint at bitterness without the chocolate being bitter; I don't know that I've ever come across such a subtle and effective use of chocolate's bitterness. The finish and aftertaste are quite revelatory; I described it as an almost mushroom richness.

Once I looked at the flavor notes, I see kiwi, raspberry, and licorice, as well as "an intense chocolate flavor that lingers on the palate." They're not exaggerating about that last part. Licorice isn't a flavor note I think of often (and not one that I would generally think would be favorable), but it does fit in well with those final flavors. As for the kiwi and raspberry, all I can say is that they're not citrus--and it's generally citrus notes that I think of as fruity. So maybe that's why I didn't describe this chocolate as being fruity.

This chocolate is incredible, and it does taste like the idyllic landscape with the trees and mountains and waterfall on the packaging. There is a simplicity and pureness to the taste, and yet the flavors are so elevated as to set up complete elegance. From this chocolate bar, I would highly recommend trying anything you might come across from Belvie.