To See the Views

Lost Dutchman State Park looms in the distance when you are headed Southeast out of the Phoenix area. The area is filled with myth: so many have searched for the rumored Lost Dutchman Mine and have only met with their demise instead of gold. Reading the stories, it's easy to see how people can get caught up in the hunt. Yet I think that the great mystery of the Lost Dutchman is about more than gold. 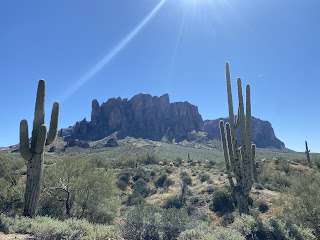 Maybe it's just because I have a fascination with the volcanic, but I find the entire surrounding area fascinating. The Apache Trail and Boyce Thompson Arboretum. There are so many shapes, colors, and textures in the land. Perhaps this is why people become obsessed with trekking across the landscape: they say it's in search for the gold when they're really under a spell by the land itself. 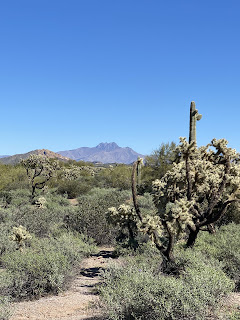 The state park offers a few short trails, as well as the one up to the flatiron. Since the latter lies beyond my non-rock-climbing skills, I stuck to the lower trails. They make a small web, so I went up and then down and across and up and back down instead of just doing one small loop. That way I was able to fully soak in the views and textures. Difficulty level is moderate: most is fairly mild, but there are a couple of places that are a little steep or rocky and a little bit of loose gravel that necessitates careful footing. 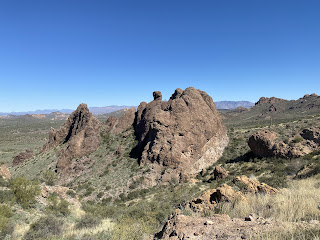 Though the weather when I went was in the 80's, there had been snow the week before. So sadly I was only able to see a couple of hidden wildflowers. But snow and rain are good, so I can't complain. And anyways, the geological colors and shapes kept me just as entertained as fields of spring wildflowers would have. After a couple of hours of wandering trails, I had lunch beneath the Dutchman, then made my way home to change before heading out again. The evening brought me to a dual event in Downtown Phoenix celebrating Southwest Shakespeare's new artistic director, Debra Ann Byrd, and the opening of the Adeline Luxury Living apartments. The event was held in one of the complex's outdoor living areas, complete with culinary delights from surrounding restaurants. 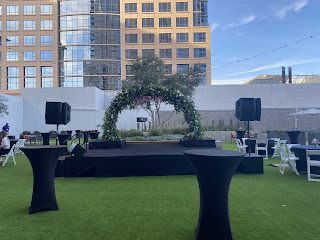 We had a chance to hear performances from both the Southwest Shakespeare Company and the Phoenix Theatre Company. Maya J. Christian's performance of "Too Beautiful for Words" was my first introduction to The Color Purple, and her delivery was indeed beautiful. 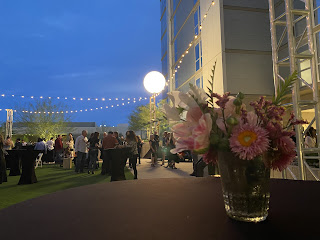 While I was at the Lost Dutchman, I gazed at Downtown Phoenix off in the distance. Then in the evening, I had a chance to go up to the 25th floor of Adeline and look on the last tinges of orange left from the setting sun. 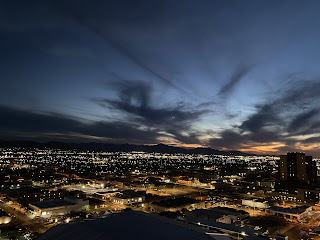 The location puts it right by both the Footprint Center and Chase Field and does give great views of the lights of the city--but more exciting to me was the way in which South Mountain provided an organic frame for the view. 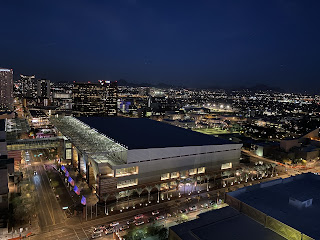 From the lonely mountains to the heart of the city, that's where you'll find me.