Simply trying out a new chocolate company is always exciting to me, but even more so is trying a cocoa origin that I rarely come across. This is my first encounter with Amedei, which is an Italian company and I also don't think I come across a lot of Italian chocolate companies. The bar in question is their Jamaica Cru Single Origin 70%, and Jamaica is certainly not the most common cocoa origin. So that means I had some exciting new territory to cover. 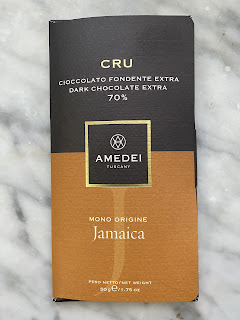 As a company, Amedei seem like a pretty standard couture chocolate company. That is, there is high class in the packaging style. Matte brown and light, burnt orange are accented with gold, and the card box folds out (in a unique folding, I might add--I particularly like the little tab that allows you to close it up again) to show info on their different chocolate bars and the cocoa beans involved. The Cru line of chocolate bars emphasizes the different cocoa origins of each one. 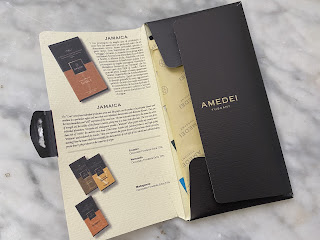 Despite all that, though, a preliminary look at both the packaging and their website reveals fairly little information. We see the country of cocoa origin and what awards they've won and that they conch for 72 hours, but that's about it. I tend to assume fair trade when it comes to artisan chocolate because I figure if they're creating partnerships with specific cocoa farms then they're probably supporting a positive network (as opposed to bigger companies buying bulk "fair trade" cocoa without asking questions about whether or not it really is). But there really isn't any allusion to that. 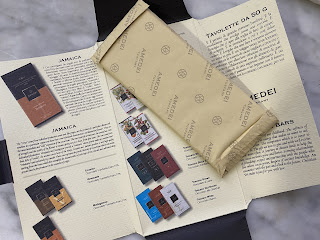 There are basically two standard chocolate bar sizes, one bigger and one smaller. Inside the card box, this one looks like it would be the former until you unwrap and see that the bar is in fact fairly small. After all, it's listed at 50 grams; 50 gram bars just usually come in smaller packages, so this one kind of tricked me. I rather like that. Along with the quest for fair trade chocolate, I think we also need to be willing to eat less cocoa, and smaller chocolate bars (that don't feel like they're small) are part of that solution. It also helps keep the cost seeming more reasonable even if it's the same amount per gram.

The cream wrapper is a little unusual, or at least less common. Its outside looks like paper, but the inside is silver and foil-like. The ten Amedei squares have a simple striped pattern on their edges which ties in with the little logo symbol that's on the front center of the card box. There is a rich, warm, and inviting chocolate aroma. 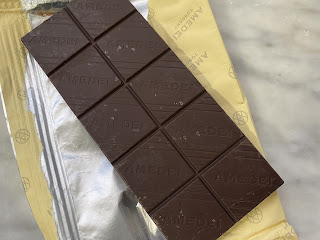 From the beginning, the chocolate's flavor had an unusual tone, sort of rich and foggy. Normally I might refer to chocolate as either blue or red, but this felt purple. The image was of a darkened cave or the last shreds of dusk at the close of day. That is, deep and mysterious and yet also not at all bitter. It was also not sweet--and it is sometimes possible for 70% chocolates to be on the sweet side. Past the halfway point of melting, the chocolate became more tender. Here is where it gained more of a brownie feeling or a straight chocolate flavor. The effect was rich and simple and yet with that same depth from earlier. A mild zing comes in the aftertaste.

It's the depth perhaps that gives this chocolate its unique quality. Depth can be associated with flavor layering. But that isn't really what this chocolate has. The depth instead is from the way that the flavor hovers within the depths. It's atmospheric. So I appreciate that I got a different type of experience. This is also a chocolate which will have wide appeal given the lack of bitterness and the inclusion of some straightforward cocoa notes.