A few years ago, I wrote about the Cacao Juice from Repurposed Pod that I got at Black Butterfly over in Prescott. More recently, I picked up a bottle of Cacao Water from Blue Stripes Urban Cacao. I'm not entirely sure if this is a separate company or if it's just a newer name for the same company. Either way, Blue Stripes is definitely worth checking out. They like to focus on cacao as a superfood. As such, you will find not only plenty of cacao water on their website but also cacao fruit smoothie pouches and dried cacao. Dried cacao? I must needs check that out. 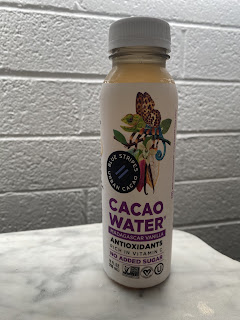 As I mentioned last time, the idea of cacao water or juice or whatever you want to call it is that a great deal of what's in a cocoa pod gets wasted in the production of chocolate. This makes me think of something Art Pollard of Amano Chocolate once said; he said that his favorite way to taste chocolate was as the cocoa beans surrounded by pulp, fresh from the pod. At the time, I never thought I would get the opportunity to taste such cocoa, as I'm not exactly planning any trips to a cocoa plantation anytime soon. (I have since found that you can guy cocoa pods online from specialty fruit importers--maybe someday I'll have a cocoa pod party.) But cacao water does get you just a step closer to looking at the whole pod, not just a processed product made out of its seeds (aka. chocolate). 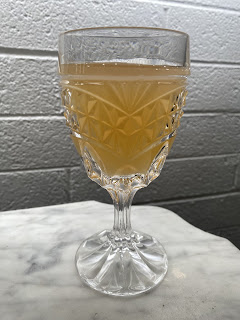 Most of my comments from before still hold for this product, except that this time I got Madagascar Vanilla. Other flavors are Mango and Chili Lime. Vanilla seemed like just a mild flavor element, which is why I started there, though the others probably go quite well, too. After all, remember, this is a tangy beverage. I likened the honey-colored liquid to a type of lemonade. So when you add vanilla to it, the effect isn't entirely unlike honey lemonade. Especially on the first couple of sips, your mind doesn't entirely know what to do with the flavors. Honey lemonade just seems like the most familiar thing to latch onto. 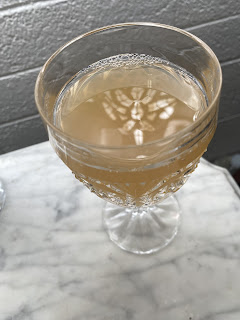 How do you describe it, besides to say that it is tangy? It isn't sweet, though the vanilla gives a hint of sweet flavor--and yet it is more sweet than some fruits. This is where the lychee comparison came in last time. Lychee also has that tangy almost sweet type of flavor. There is a thick and heavy aroma to the beverage this time that I don't remember noting last time--so I'm going to say that it comes mainly from the vanilla and not as much from the cacao. While, in theory, vanilla should make such a drink more palatable, I feel like I enjoyed the plain version more. It's been a few years, so I really can't say; I would have to do a side by side. It could be that last time was just when the whole idea was new to me, so I was very excited about the overall product. But I didn't feel like it was lacking in anything when it was plain. My recommendation at this point, then, would probably be to either get it plain or to try the Mango or the Chili Lime.
But whatever flavor you settle on, the product is great. I like the idea of it, and I like the way it tastes. If it's a superfood beverage, well, it's a fun one. It doesn't taste anything like chocolate, if you hadn't realized that by this point. But it's a nice drink to keep on the refrigerator shelf between the coconut water and the açaí juice for days when you just want a little extra boost.
Posted by Deanna Skaggs at 8:25 AM