Something Stirs in the Night

A rustle comes from deep in the dark of the desert. No, several rustles. Small and swift. Jackrabbits, maybe? The sound isn't right for a heavy javelina. Just turn to the side and take a look and see. There, in the light, a swarm of slippery critters, teeth gnashing in tandem. Perhaps their small size will be enough to keep you safe. 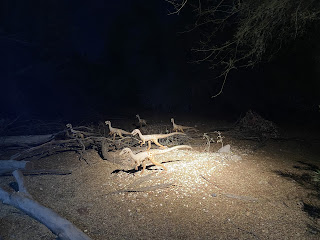 But oh, what's this? Something louder but just as quick. Maybe a slender, muscular mountain lion this time? Is that what haunts the hollows bellows the saguaros? But no, those cannot be raptors so fierce and so bold? Never have I heard of raptor desert-dwellers--unless they be the birds-of-prey type of raptors. 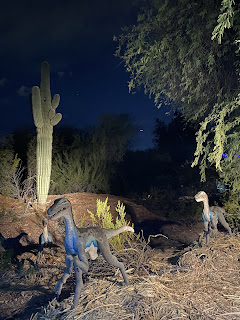 Just then a tearing, ripping noise enters in. Maybe accompanied by a snarl. Or was it a gurgle of pleasure? For just there, in the next patch of light, a feathered raptor dips into its moonlit dinner while its hungry friend approaches with hopes of communion. Let the unholy feast continue so long as the toothed mouths are filled with something other than you or me. Let's just try and keep moving, hope they haven't seen us, aye? 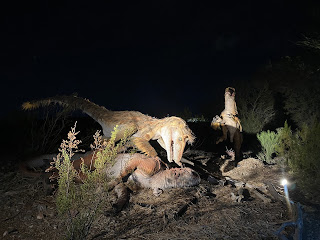 Alas, however, the last sound we hear is the loudest of them all. Surely no desert creature was ever so big as this. Two mountains of teeth and claw stand poised against each other, with the fell full moon between their jaws. Muscles ripple beneath scales and limbs stiffen in preparation for the conflict. Never was such a fight as this seen in the Sonoran--at least not for many years. If we were not so affrighted for our lives, perhaps we would be honored. Let's run now, shall we? 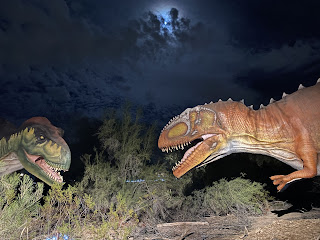 Pictures taken at Dinosaurs in the Desert at the Phoenix Zoo.

Posted by Deanna Skaggs at 8:10 PM