1) Good Food - My food writing class just ended, and I realize it's impossible to have read both Barbara Kingsolver's Animal, Vegetable, Miracle and Michael Pollan's The Omnivore's Dilemma and not make at least some small change to your eating habits. Hence, I'm trying to rely more on the farmer's market. Today's lunch, a simple salad, came from there (except for some salt and pepper and a tad of balsamic vinaigrette). 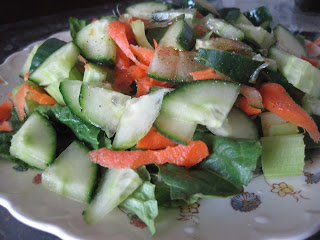 2) Not as Good Food - Archer Farms is the supposedly more natural brand Target sells. I don't know how much better their products really are, but I have a slight addiction to their Chocolate Chunk Hazelnut Biscotti granola right now. It's granola that tastes like chocolate and vanilla--what could make a nicer breakfast, snack, or dessert? 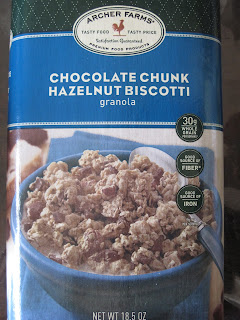 3) My Vintage Hat - My brother got me this hat for Christmas; he says it's from the fifties. And I say that there's nothing like a vintage twang to an outfit. 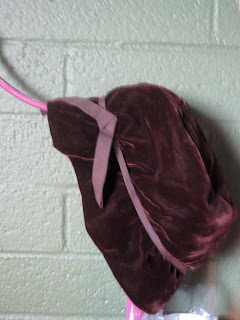 4) Another Tree Notebook - I've actually had this one for a while; I bought a pack of three (one is a shade of orange and the other is tan) at Target. I think they're recycled or some such thing--further, they have trees on them. They're nice and thin, easy to carry around for any type of miscellaneous notes you need. 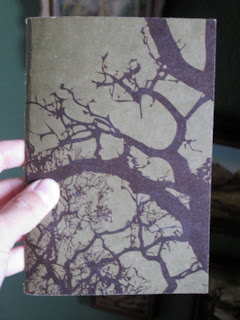 5) My Cameo - I've had this cameo for years now, but I hadn't been wearing it as often because I made the unfortunate decision to string it on one of those ribbon necklaces that they sell with glass pendants at malls. I thought that would bring the modern edge to the cameo, but now I think it just cheapened it. So now it's back on a regular Barse chain, which I like much more. (A ribbon could also be nice, but it would have to be the right ribbon.) 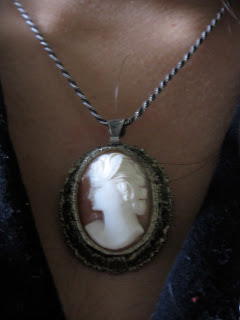 6) Thayer's Rose Petal Witch Hazel Toner - I think it's been a year since I first started using this toner. It's rather nice, not containing artificial junk ingredients and also coming in this pretty bottle. I use it both in the morning and at night; it smells lightly of roses and feels nice on the skin. 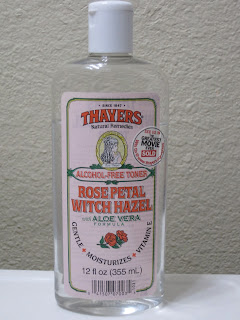 7) Avon Supershock Mascara (in Waterproof) - This bottle is almost empty, but I consider this one of the better deals in Mascara. I think it's about five dollars, but it's actually one of my favorite mascaras (I have a thing for mascaras: I almost hate to buy the same one twice because I want to try them all and see which is best). Diorshow is great, but it's pricey. And I didn't think much of Covergirl's Lashblast. 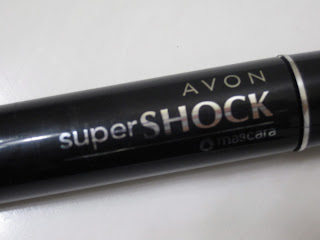 8) Sleepy Rebels - While I wait for Blondfire's new CD to come out, I've been enjoying Erica and Bruce's other band, the Sleepy Rebels. It's nice and calming and happy, indie music as it should be. 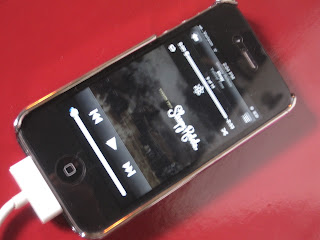 9) Jeannie Barbie - I never mentioned this purchase, did I? Again, I've had this one for a while. Because of my obsession with I Dream of Jeannie, I just couldn't resist getting it. It sits at the bottom of the shelf in my room, next to an antique doll; that pairing was my attempt to make it look like a Barbie fit in and wasn't a weird thing for a grown person to have. And, yes, I also chose the purple bottle because it reminded me of Jeannie's. 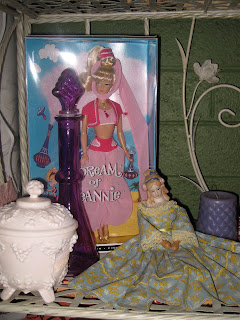 10) Scarves - I have a good amount of scarves, so I've been trying to wear them more often. The trouble is that it's either too hot (though not right now) or I'm wearing necklaces that won't go with a scarf. I like necklaces, so if I have to choose between them and a scarf, the scarf will lose. 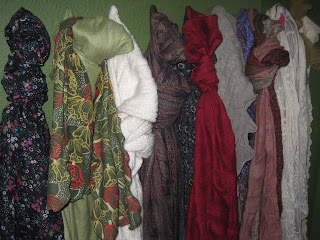 Posted by Deanna Skaggs at 3:38 PM