Back in high school, I was at Barnes & Noble and found an unabridged dictionary for $15. I fell into awe, then bought it.

Not everyone would understand such a thing. But I recall one conversation with a peer in which I related this story. He agreed with me that it had, indeed, been an amazing buy. Unabridged dictionaries just aren't that price.

But most people don't use physical dictionaries anymore. We rely on Word's system (though we all know it's far from infallible) or use an online source. I wanted to keep using my fat, unabridged dictionary, but having very little shelf space, it became difficult to get to it. Eventually, I even had to put things on top of it; so I stopped using it at all.

Until recently. I decided that a "dictionary table" would be nice. I was thinking just a small side table, but I was with my parents at an antique store earlier this month and what did we find? A dictionary table. It's a short table, a little under two feet, with a flat surface at a slight slant and complete with the little edge to keep books from falling off. Wow, a real book table. I admit, my dictionary probably looks quite like a family Bible, but that's okay--open books as decor (that also gets used) are so wonderfully nerdy. 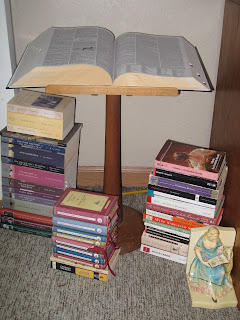 The reason I have little piles of books around the table is a conversation my brother struck up about my bookshelf looking ready to topple over. I always knew it was a cheap shelf that I had way overstuffed, but I had looked on it as my only option. Shelves aren't the only option, though: the floor works quite fine, too. So I settled the classics (which are mostly a couple of kinds of Barnes & Noble editions) around the dictionary, and put the bulk of my collection right where the shelf had stood. Ideally, the stacks shouldn't be this high, but this will work for another couple of months until I have more room. 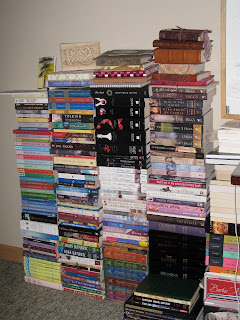 The leather-bound B & N classics I put with the crusty books (including a fat dictionary from, I think, the '40's) in the living room--this metal shelving piece had previously stood where the dictionary table now is. 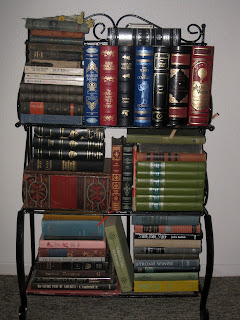 I do believe the piles of books everywhere are indeed making the apartment look nerdy. Huzzah.
Posted by Deanna Skaggs at 6:37 PM