First, I must apologize for the hiatus from posting. It isn't that I haven't had ideas (like a comparison of Emma Shapplin's songwriting to Byron's poetry and an extended comparison of The Silver Chair to the King Arthur legends); it's just finding the time that has been the issue.

1) Cinderella Compact Mirror - As part of a new edition of Cinderella coming out, Sephora had a Cinderella line this month, including perfume and makeup. But the loveliest item I thought was this mirror. I have been using a pink plastic one from Ulta, and there's nothing like transitioning into a decorated compact. The circle shape is of course like the clock that chimes the end of Cinderella's spell, but it also has the look of a compass. It's Disney without screaming out Disney. And isn't it wonderful to have pretty things? 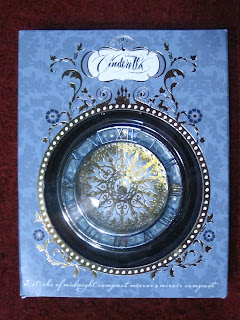 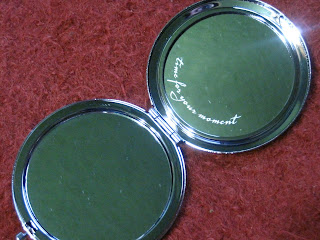 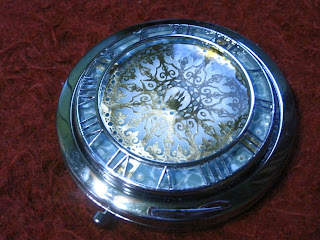 2) Beaded Bracelets - I think I must have made these bracelets twelve years ago. I sometimes wore the smallest one, but mostly they just sat in neglect. Now that I'm getting into wearing bracelets, I've been bringing them out. I've realized that layering can be the key to bracelets, at least for me with my tiny wrists. So I'll wear two or three at once, or pair one or two with a different bracelet. 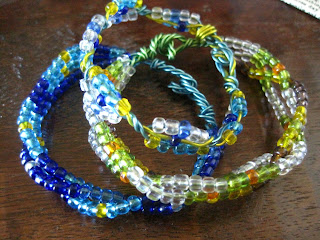 3) Flyleaf's New Horizons - As you may know, this album came out yesterday. I've listened to it three or four times, but I must withhold all commentary until I've had a chance to ponder it some more. I promise to give my thoughts later. 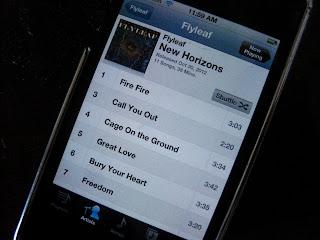 4) Flag Scarf - This was actually a ModCloth purchase, along with my purse and things last month. I suppose I didn't include it on that list because I haven't actually worn it yet. What do you think, does this coming Tuesday, aka. Election Day, sound like a good day to christen it? 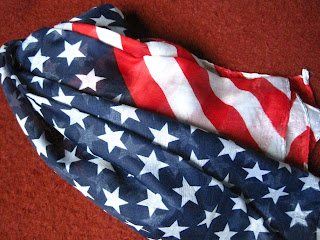 5) President Gaga - Along that note, I once again want to give a shout out to The Hillywood Show's newest video, which I find has been very addicting. It plays in my head even when I'm not watching.

6) Black Shoes - Also purchased last month (I may have had an Aldo gift card . . .), I chose these shoes mostly for wearing with tights. They're also nice because I can ride my bike with them. Just a basic shoe. 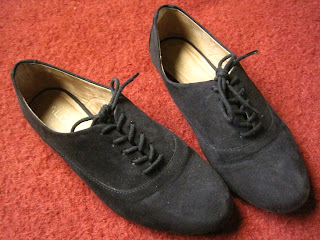 7) Scrabble Ring - I've had this ring for a couple of months. I like the randomness of it; usually I pair it with a second ring and layered bracelets or necklaces to complete the eclectic look. 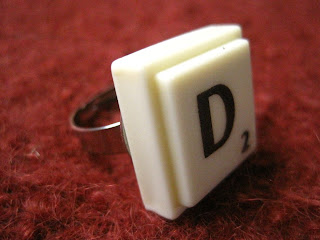 8) Perfume - I never really got into perfume. Maybe I didn't see the point in spending the money on it. Maybe I had only smelled perfumes I didn't like. But now I'm getting interested. I've been wearing a couple of sample perfumes I had lying around, and perhaps I just might think about getting a full size perfume at some point. The middle bottle in the picture, by the way, is not a sample: it's a little bottle of lovely fragrance that I used to use sparingly--but have decided I might as well wear more regularly. 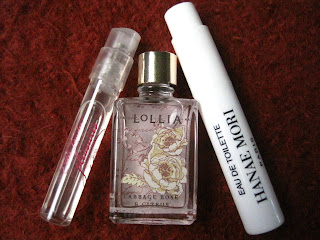 9) Owl Pin - This trinket came from a peddler's market this summer; I think it was a dollar. It's tiny size makes it nice for sticking onto a collar or a scarf for a little extra entertainment. 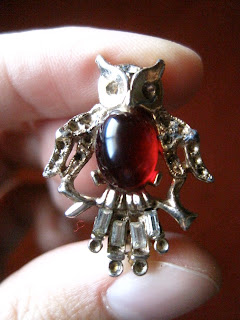 10) John Keats & "Bright Star" - For some reason, the opening line of this poem has been playing in my head all week: "Bright star, would I were as stedfast as thou art." And we're not even reading John Keats in my Romanticism class until next week. I've taped a copy up above my desk along with my other random notes. But it's a fantastic poem; you should go read it. 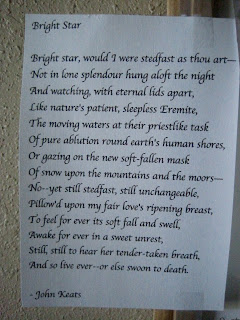