You know, sometimes that's just how the world tumbles. There I was, all set to give a pretty positive review of this chocolate bar when I took a moment to first visit their website. And what do I find there? News, from one week ago, that the company has had to close down due to funding issues. Well, that will make my review more glum. I can't exactly recommend a chocolate that you won't be able to buy for much longer. So if Fearless Chocolate never returns, then what I will be doing is saying what I think worked about this particular bar of chocolate. 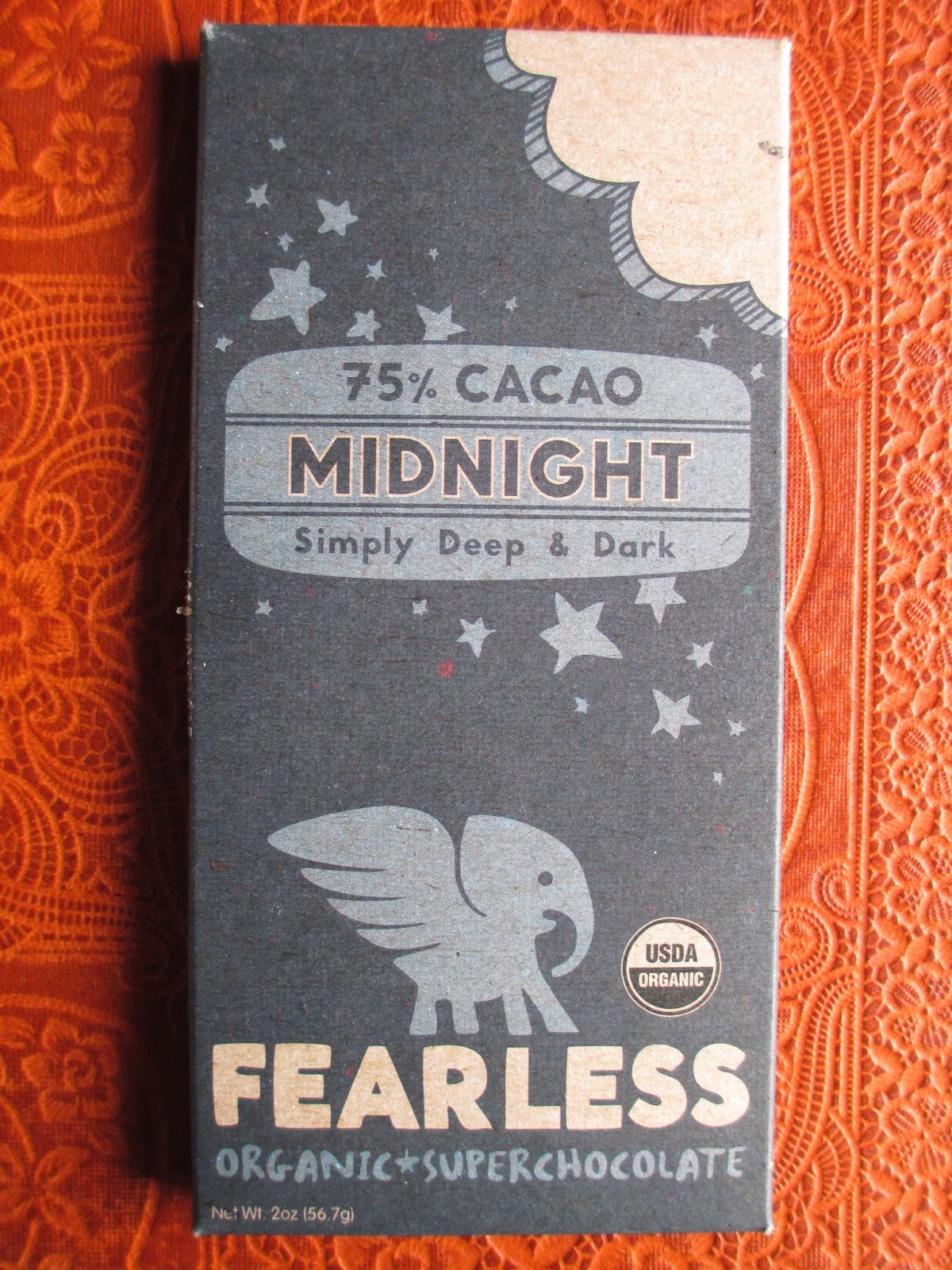 There were I think around three Fearless bars on the shelf. I'd never heard of the company, so I wanted to try something, but they were mostly superfood-type chocolates. I have absolutely nothing against eating healthy, believe me, but I don't like to eat foods just because they're trendy--or superfood. Cabbage is healthy and tasty, thank you very much. And chocolate is mighty tasty on its own, without the addition of weird ingredients to try and make it healthy. So I ignored the flavored bars for the plain one. At 75% cacao, it's a dark chocolate of average cocoa percentage. Interesting to note, though, is that the other ingredient is cane sugar. That's right, no vanilla. Most chocolate has vanilla. So if a company can pull off a great-tasting chocolate without vanilla, then their chocolate making process has things right. 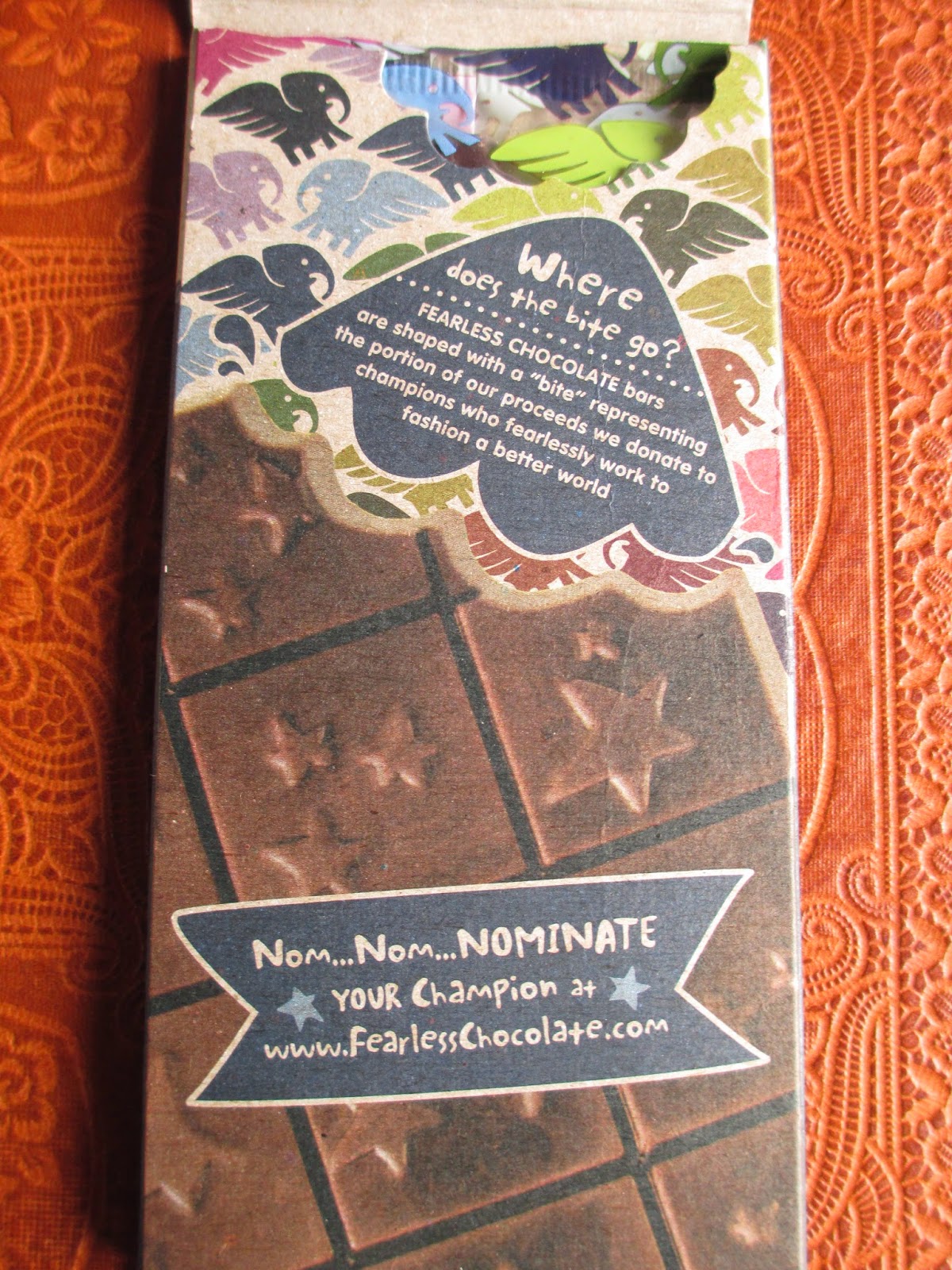 This chocolate is bean to bar, organic, and fair trade, made with cacao from family farms in the Mata-Atlantica rainforests of Bahia, Brazil. The company is based out of Berkeley, California. The outer card box is made of 100% recycled material, and with its simple, matte coloring, it gives off that cool hippie vibe. But once you start unwrapping, there's more color, both on the inside flap of the box and on the chocolate's clear wrapper. They're like psychedelic, flying elephants--that colorful sequence in Dumbo meets Greek mythology. 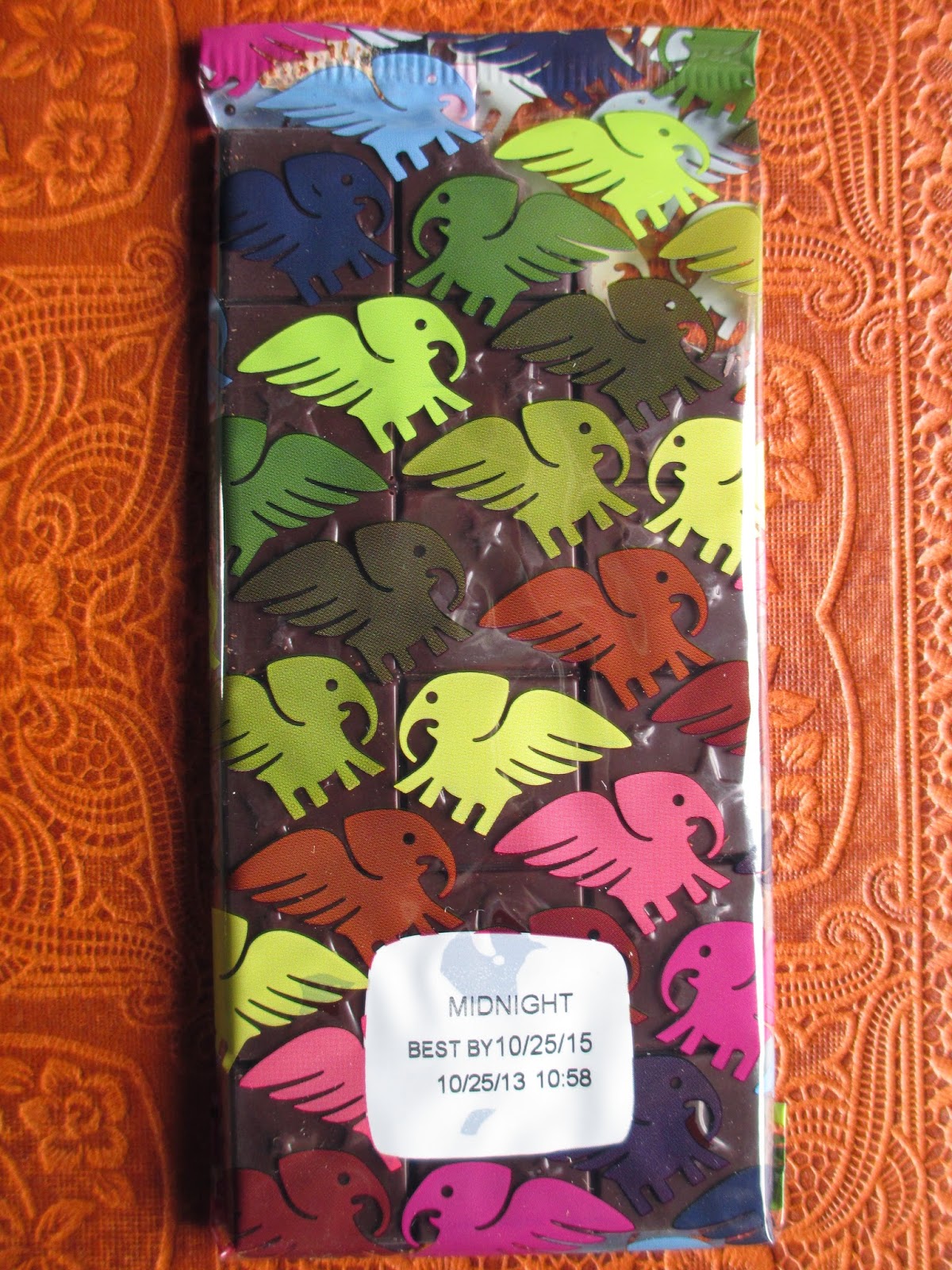 The colorfulness continues onto the chocolate bar, though in a plain shade of brown. The chocolate squares are covered in stars of different sizes and one elephant towards the bottom--this time, for some reason, without wings. The bite mark out of the top the portion of proceeds the company donates to help make a better world. All admirable, but given that the company just closed, perhaps they needed more focus on their own income instead of giving donations? After all, just by promoting ethical and sustainable chocolate, you're already helping make a better world without putting donations on top of that. 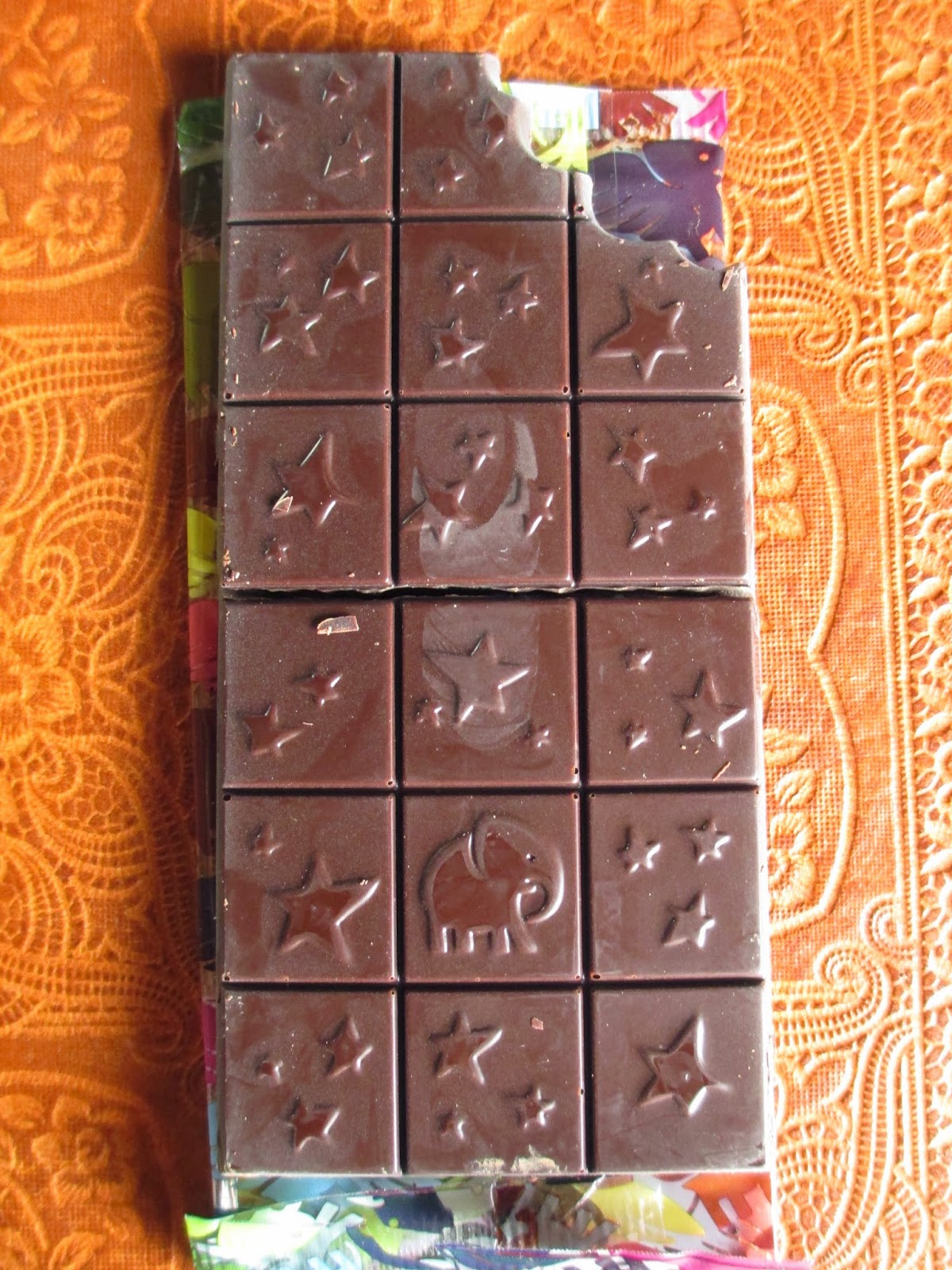 From the aroma of this chocolate, I was putting it somewhere in the same range as the Dark Chocolate Lover's Bar from Trader Joe's--you know, the one that kind of has those marshmallow notes coming out of the dark. But, really, there's a lot more going on than that. As you begin to taste, berry notes come in and the flavor becomes so tender. There was just a moment where I felt like the texture was a tad grainy, but that quickly faded; I read later that Fearless used a "low temperature environment" so perhaps if the chocolate was refined and melted at a lower temperature, that would explain any slight graininess. Going back to taste, there is no bitterness in this chocolate. Those berry notes hint at what I call brownie richness, nice and warm, although there is also something cool about the flavor of this bar. It really does have a layering of flavors. It's nice. I would recommend it if you still see it for sale anywhere.

I have one final point to ponder. If anyone watched the EAT: The Story of Food documentary series recently, you'll recall something they said during the section about beer. Someone on there said that beer was the only product that you can be knowledgeable about, etc. without being snobby. That's true. There is wine snobbery. Bread snobbery. Steak snobbery. And chocolate snobbery. That's why I always try and tell people that the best kind of chocolate is the kind that you enjoy best, though I do also encourage them to taste different kinds of chocolate so that they can see what's out there and find what they ultimately do like best, apart from what marketing tells them they should like. I don't want to be a chocolate snob. I just don't like Hershey's chocolate anymore. I just can't stand overpriced, cheap chocolate when there are such amazing chocolate products out there.

All of this brings me back to the image I got from this one bar of Fearless chocolate. The hippie outer shell, the colorful inside. There's nothing snobby about it--and there isn't much gourmet about it. It's rustic in some ways, silly in others. It's casual. It's approachable. Yeah, they mention their ethics, but they don't shove them down your throat. Yeah, it's great tasting chocolate, but it comes in a simple, matte card box. Gourmet in taste yet approachable in design. Goodness knows I love Amano with their amazing chocolate bars in glossy boxes, but nothing needs to be like that. We could use more chocolate like this. Fearless chocolate may be gone, but they understood many of the important facets of chocolate making.

Posted by Deanna Skaggs at 2:35 PM