Lately I've felt like I should know more of Native American stories, particularly those from the general area where I live. But these are oral traditions that aren't always set down on paper--and often intentionally so. One of my professors in college taught a class on Native American stories (I never took it, but now I think that I should have), and that was something he talked about, the extra layer it adds to learning when a lot of the stories simply aren't in print. In high school, for instance, one of my friends did a scholarship where he had to do a project on these oral tales--and therefore he had to go and talk to members of the community to hear their stories.

So when I was at the Grand canyon last year, looking around one of their gift shops for a unique book that I wouldn't happen on elsewhere (and also one that wasn't just about the geology), this one caught my eye. Trickster: Native American Tales - A Graphic Collection, compiled by Matt Dembicki and published in 2010. That's right. It's a volume with twenty-one different tales, all told in graphic novel style. 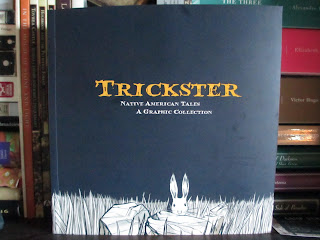 And right away, that concept seemed to fit, as random as it might at first seem. Oral storytelling is a specific narrative style. When you try and write it down and print it out, it changes. (This is why Beowulf always seems to look best when it's kept in verse; prose just doesn't keep the right flow.) But when you add all of the illustrations of a graphic novel, the pacing becomes something specific. There are certain pauses when you look at a picture--similar to the pauses a speaker might make for dramatic purposes. And it simply gives the story more of a living, moving feeling, even more of a feeling that it is being told by a narrator. So I really like this concept of telling these stories in this form.

When I was flipping through the book at the store, though, I hesitated because of the style of some of the illustrations. Let me first explain how the book was put together. Matt Dembicki had the idea because he, too, wanted to learn more Native American stories and also help other people find an interest in learning them. So he found Native American storytellers who would be willing to take part in the project and he let them choose their illustrators from a group of artists; the storytellers also gave approval for how each panel turned out.

The thing is, these illustrators are all quite different--something that seemed to bother many people in the reviews of this book. I kind of agree, though maybe not as strongly. When you flip through the book, the colors change so quickly: earthy, vibrant, neutral, extremely bold, very yellow, very brown, very blue. The styles changes, too: fairly realistic, soft, cartoonish, very computer-y, more hand-drawn-looking, and so on. The styles do go with the stories, and I found myself thinking less about the differences in styles when I was actually reading--but still. If there were a little more similarity to the styles, the book would be visually much less random.

I generally preferred the more serious styles of illustrations. But at the same time, I don't know if I can ask that they all be that way: there is humor to these stories and there is casualness (that isn't the right word: I just mean to say that they aren't stuffy stories, many are stories of regular animals and regular settings and such). So a cartoon style does make sense, considering that this book is a fusion of two cultures (while still maintaining the traditional styles of the stories themselves).

Note that I haven't said much about the stories themselves. This is because I don't feel capable of saying anything about them: I've said I'm not very familiar with too many Native American stories. So I can say that I liked or didn't like and that's all--and that seems weird to say, too. Instead I'll just comment a little on the style. Many of the stories read similar to fables, having animal characters who talk to each other and sometimes to people. Many of them explain things in nature, like why there are stars in the sky or why alligators are scaly. Some are moral tales, sending messages to help young people know how to behave and imparting values. Some of the writers choose a more serious, poetic style--others modernize a bit with simple wording.

I kept imagining almost that I was reading the stories out loud--or that someone was reading them to me. As such, this volume would be great for reading with children, a good way of introducing them at a young age to a little bit of Native American storytelling. I do feel like I should add, though, that depending on the age of your child, you might want to skip one or two stories, or at least just check them beforehand. Otherwise, though, I think there is a lot in here for children to enjoy. That said, I don't mean that I think of this as a children's book. Certainly not: this type of story is for any age, provided you have the interest. (Use common sense: if you hate fables, though these are a little different, think twice and let everyone else enjoy this book.)

Mainly I like the concept. But I also enjoyed reading. The stories are quick to read through and a good starting place. One last note I seem to have forgotten: these aren't stories of a specific region. They range from the Southwest to Alaska to Hawaii and so on throughout the country--and it's usually pretty quickly apparent what the region is because the stories all draw from nature imagery and animals particular to certain areas.