Ahsoka: Enough to Inspire Us All

I was rather disappointed that it took some digging to find this book at Barnes & Noble. Usually the new Star Wars books are up towards the front, or on the tables in the middle of aisles. At least up in the Sci-Fi New Releases section or something. But I looked everywhere I could think of and Ahsoka by E.K. Johnston was nowhere to be found--until I thought to look in the Teen Sci-Fi New Releases and there it was. 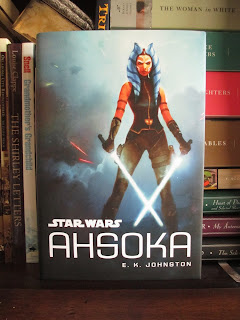 I had overlooked or missed the fact that this is considered a YA book (which is why it's published by Disney, but I hadn't been looking at the publisher, just at the release date). So when I released that in the store, I felt cheated. I felt like Ahsoka got the short end of the stick. Here is this character who has become so beloved from her roles first in The Clone Wars and then in Rebels, and she's finally branching out into a new medium with her own book and it's a book that doesn't get the usual bookstore prominence and will possibly therefore not reach as many readers. (Sales of this book seem to have gone pretty well, anyway, but I just had to throw in this reaction that I had.)

The thing is, I don't really get why this is a YA book to begin with. Just because a character is a certain age doesn't mean that has to be the reader's age. Oliver Twist isn't targeted at nine year olds. Anyway, if I'm not mistaken, Ahsoka is about 17 or 18 during this book, so she's basically an adult.

With that said, I'll take a moment here to appreciate the style that E.K. Johnston took. Unlike, ah, certain other books, there is nothing dumbed down or simplified here and yet the language is simple enough for an eleven or twelve year old to read--so there isn't much limitation on who can read this book.

What I also appreciate is the atmosphere of this book. As I've started reading Star Wars books in the last couple of years, I've noticed that some of them are more sci-fi than either the movies or shows are--and that tends to interest me less because it is not what I'm used to loving best about Star Wars. So the books that are more like Ahsoka are the ones that I find I enjoy more. There is more about nature and relationships instead of just technology and politics (certainly the latter two elements are important, too, but I like the former two to have more focus).

Raada was a pleasure to read about. A Star Wars farming planet? I'm in. I can visualize the landscape of that moon, and I can see the fields and the mountains and the people there working to bring in the harvest. And then all of these visual elements come back around to say something about theme, to reflect something about the characters--Ahsoka primarily, of course.

This book takes place about a year after the events of Revenge of the Sith, so it fills in the gap (or part of the gap) between The Clone Wars and Rebels. The book does assume that the reader is familiar with Ahsoka from the former and kind of the latter, too; it also references some of the backstory that Dave Filoni described in the Ahsoka panel at Star Wars Celebration. So it answers some questions about Ahsoka, and that's certainly interesting to read about.

But what is perhaps of more value is the sheer enjoyment I had of this story, both on an entertainment level and a thematic level. This book had great pacing, as far as quieter moments mixed in with action. There is a good balance of personal relationships between characters mixed in with questions about purpose and ethics. Maybe this is where we actually get most YA: there is that theme of identity, of realizing who you are and what you should be doing. This theme is portrayed so well, in fact, that it did affect me on a personal level. It did make me think about where I am and where I could be and what I'm not doing and what I could be doing. Ahsoka, at some point after she came to us all as the girl who was Anakin Skywalker's padawan, became an incredibly inspiring figure. She feels more real than Obi-Wan Kenobi and more centered than Anakin Skywalker, and that makes her the perfect leader and force for good.