I've never been to Utah, but someone did recently bring me back a few chocolates from Utah. I've reviewed one chocolate bar already and I have one more after this. Today's subject, though, isn't just from a shop in Utah--it's also from a Utah Company, Utah Truffles to be exact. I have three of them: a Toffee Truffle, a Mint Truffle, and another Toffee Truffle in different packaging. 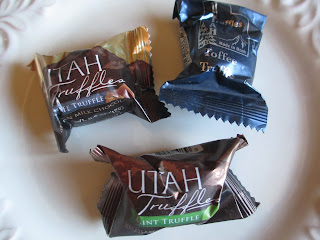 Now, seeing the word truffle made me think I'd have to get to these straightaway. Turns out, though, that they have quite the long shelf life: the the best by dates aren't until December and April. In their shiny wrappers, they have a similar look to Godiva's wrapped truffles, but even Godiva's only last about three months (according to their shopkeeper). So I walked in knowing that these weren't going to be "truffles" in the traditional sense if they could have a shelf life of several months. 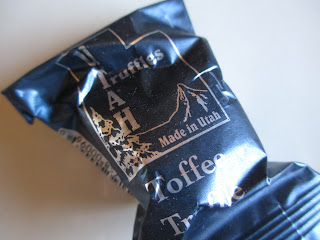 I'm not entirely sure what is going on with the different packaging. It's possible that they switched styles and one is the old version. Or perhaps the two Toffee Truffles are slightly different. The one in blue says "Made in Utah" while the other two say nothing of the sort. I would think, however, that if one is made in the state, then they all are. The chocolate, however, is Belgian--and I think everyone knows by now that I see no need to import chocolate from Belgium when there is perfectly good chocolate in the U.S. (and usually the chocolate I come across here that's called Belgian is cheap, so I'm always suspicious if the name is used as a draw). 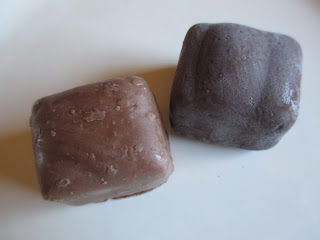 I only took pictures of the other two truffles because the packaged-in-blue one was a little smashed. The visual difference between the two Toffee Truffles was a bit of shaved chocolate on top of the blue one. It also seemed slightly lighter in color: it's pretty watered down chocolate what with added cocoa butter, butter oil, and coconut oil. There is no ganache center to these three truffles: the whole thing is just a creamier version of chocolate. 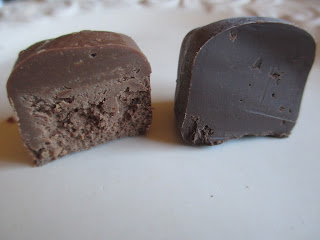 I suppose, for watered down chocolate, it's alright. It is creamy and there is some flavor to the chocolate. The toffee element is a series of small toffee bits that are big enough to have a texture presence; the effect is similar to the way in which crisped rice is strewn about the chocolate in a Crunch bar. Again, it's alright, but this isn't a truffle. 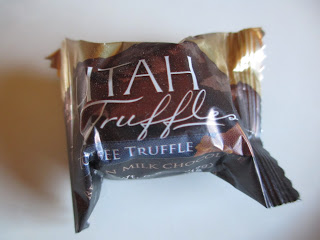 The other Toffee Truffle is mostly the same. At least, the toffee element is exactly the same. The chocolate is somewhat denser and tastes more like caramel, so the ingredients must be mixed in at slightly different proportions. They're similar enough, though, that I don't have a preference of one over the other.

The Mint Truffle is the weakest of the three. It's the only one with dark chocolate (because mint almost always needs dark chocolate rather than milk), but I'm an advocate of sticking to milk chocolate if you're just making sweet confections: otherwise the dark just feels awkward and halfway and not quite right. This chocolate, however, is light and sweet and watered down enough that it doesn't really taste dark in any way. So that isn't exactly an issue. And the mint, while not exactly fresh-tasting, tastes pretty much exactly like that of a Girl Scouts Thin Mint cookie, especially combined with this chocolate. So if you're a Thin Mint fan, you'll enjoy this chocolate. My issue, though, is with a weird side taste that I'm finding. I don't think it's from the coconut oil because I didn't get it in either of the other two chocolates. So it's either from cheap peppermint or somehow from the chocolate. Whatever the case, it ruins the effect.

It isn't that the packaging here implied fresh and gourmet. It's just that one word: truffle. These aren't truffles, so I really wish they weren't labelled as such. They don't look like truffles and they don't taste like truffles. They're also not fun confections: they're more like grocery store chocolates than confections. They're nice enough as a little something sweet, but the chocolate is either not good enough quality to begin with or watered down too much for these to be anything more than sweets.
Posted by Deanna Skaggs at 1:47 PM