This chocolate candy is quite the opposite of last week's Theo Peanut Butter Cups--but I already had this Milka Leo bar at home before I picked up that one, so we'll just go on ahead with this (brief) review. 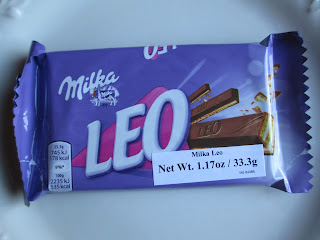 Obviously, the Leo bar is Milka's equivalent of the KitKat. I do have a soft spot for KitKats, though I prefer when I can get the international versions from World Market instead of the U.S. ones (which are made by Hershey's). I've never had Milka's version before, but I do enjoy Milka's chocolate because it's sweet and creamy like caramel and therefore rather nice when you're in the mood for that sort of chocolate. 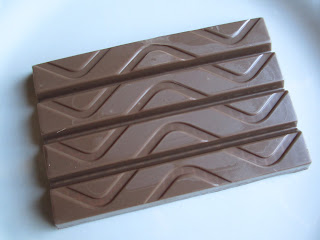 The wrapper is the usual purple color Milka always uses. The chocolate surprised me with a swirly, wavy pattern on the four sticks; it gives a sort of modern look that makes more of a statement than simply marking the chocolate with the brand.

Naturally, the wafer sticks are very, very sweet. I'm sure the chocolate has an extremely light cocoa content, so it all tastes as if there could be a layer of caramel in there--which is not a complaint given that Milka chocolate does have a distinct and pleasant caramel flavor. 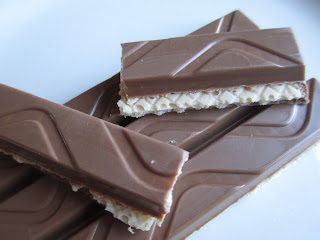 The wafers are the standout surprise to me, though. They're nice and light and crisp with the perfect level of crunch to make them addicting and to provide a balanced base for the taste of the sweet chocolate. There may also be a light layer of filling in between the wafers, some sort of sweet cream to help keep it all from getting dry.

As far as the wafers dipped in chocolate style of candy goes, Milka makes a nice contribution. I enjoyed these. That's it, though: I can neither more nor less on the subject because there is nothing left to say.