The Beginning of the Thrawn Trilogy

At last, it begins. As you know, I am currently trying to keep up with the main new releases in Star Wars novels and have been trying to do so since the whole canon/legends thing started a couple years ago. It's been fun--but I am at last able to stretch out even more and read my first non-canon book. I've written down a couple of titles I want to read, but I had to start with the Thrawn Trilogy given how much I've heard about it. Ahsoka. Thrawn. Mara Jade. All these names I used to hear, knowing they were important but without knowing what they meant. I met Ahsoka in The Clone Wars and then Rebels and eventually in her own novel last month. I had a brief encounter with Thrawn when he showed up in this season of Rebels as a character full terrifying enough to justify his reputation. So, you know, I was pretty excited to read more about him in the first book in this trilogy, Heir to the Empire. 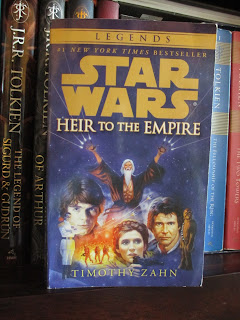 And then, as I read, I stumbled into Mara Jade. Aaaahhhh! I knew basically who she was (or turned out to be?) from when I was reading a couple of pages online several years ago to find out how old the main movie characters were. Since then, I've wondered so much about who she is and what she's like. I wanted to eventually read some of the books that feature her; I just didn't know which ones she was in. So it was quite a welcome surprise to find that this book contains quite a bit of Mara Jade. It may sound funny, but I felt privileged to be reading about her.

The thing is, she just lights up the pages, bounces off of them in full realization. She's one of those characters who instantly become iconic, who so quickly take and hold your interest. And the scenes between her and Luke were probably my favorite out of this book: their banter is more fun than Han and Leia's and greatly entertaining to watch. I now feel for everyone who was heartbroken that Mara Jade was made non-canon.

Mara Jade aside, this was still a great read. Timothy Zahn knows just how to balance out all the elements of a story and all of the different characters. Drama sits alongside action, and the right amount of humor accents the right amount of suspense. And so on. This is one of my favorite Star Wars novels so far--not unsurprisingly given that, out of all the legends books, it's one of the ones that's apparently still talked about so much.

I have only one more note to make. Some people compare events from Episode VII to the plots of the legends books, trying to see if the legends give hints about what will happen next in the movies and also seeing how certain themes or images remain. Likely this one has been pointed out already. In Chapter 11, Luke has a vision of Mara Jade catching the lightsaber that he is reaching for. Does that sound just like Rey catching Kylo Ren's lightsaber (well, Luke's lightsaber that Kylo is reaching for) to anyone else? The similarity may be potential evidence that Rey has or will have a dark side and that Rey and Kylo Ren are connected on a personal level.

Unless I find I have a great deal of comments after reading the second book, I'll probably wait to do a post on both the second and third installments of the trilogy. I'm hoping to finish off both of those before I get around to buying the new Rogue One novel because I know I'll want to start that one as soon as I have it.