Wei of Chocolate used to have a booth at ASU's farmer's market; since I would usually try and pick up some foods there (I still crave the challah bread one of the clubs on campus sold), I did of course at one point get some chocolate (this is back when I was doing my reviews on Chocablog). They sold a little tube of several flower-shaped chocolates in different varieties. I remember that I liked them but it was long enough ago that I don't particularly remember what they were like. So when I came across Wei of Chocolate again at a shop, I picked up two of them to revisit. 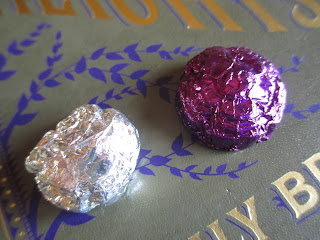 Though they are the same foil-wrapped, floral shape that I remember, these flowers are smaller; unless I'm mistaken, they're about half the size. And I love this tiny size. The shop I was at had them in a bowl at the register, making them perfect for picking up when you need just a touch of chocolate--or a handful to share. Each one was under a dollar, and for reference the circumference of the chocolate flowers is just a little bigger around than a quarter. This is about as small as chocolates get, considering that plenty of truffles are bigger.

I love the size, though, because not only does it allow for the possibility of just wanting a little bit of chocolate--it also makes the experience more casual. If we had more chocolate like this, then we would need less KitKats and Reese's Cups (I confess, I had some of these for Halloween and they were delicious because I hadn't had any in a while--but the world needs less of these chocolate candies rather than more). In the bowl, all of the foil wrappers were reminiscent of M&Ms. (One more side note: with a name like "Wei of Chocolate," you'd think they would use a more environmentally friendly material than foil.) 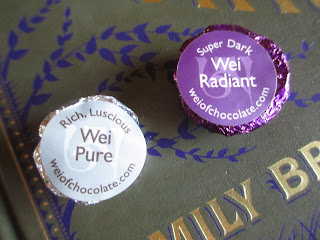 I can't offer a picture of the chocolates this time--though I do apologize for that because the mold that Wei of Chocolate uses is rather nice, showing off all of the flower petals. (You can see in the first picture that the silver chocolate is smashed; I didn't really take care of these because I wasn't sure if I would even review them since I've covered Wei of Chocolate before. So perhaps this is more of a note than a review.)

As you can see, the silver chocolate is named Pure Wei and described as being rich and luscious. It has flowery notes and the taste of cane sugar mixed in with deep chocolate. It isn't bitter at all except perhaps in the aftertaste.

The purple chocolate, Wei Radiant, is supposed to be super dark. And it is. It's bitter in a way that I don't consider very pleasing. The second half of the chocolate, though, is more pleasing than the first; at this point, your taste buds get used to the flavors and the flavors themselves start mellowing more. Now, this one does offer a rich chocolate taste that's rather nice, but I prefer not to also have to get that dose of thick, biting bitterness.

I definitely, then, prefer the Pure Wei to the Wei Radiant. I don't mind very dark chocolate; I just like it done a certain way. I do wonder what cocoa percentage these chocolates are. I want to say the Wei Radiant is around 80%, and the Pure Wei might be in the 60's range. But I'm not used to trying to guess on these. I usually don't care for dark chocolate under 70%, but this one (if it's even under 70%, which it might not be) offers a unique approach. You know the Mexican hot chocolate that comes in thick discs? If you nibble it, you can taste the chocolate and the sugar crystals. That is, you can even see the sugar crystals. You can't see them in this chocolate, but you can taste them in that same distinct way. It makes for a nice flavor effect.

I can't say that these are the best chocolates I've ever had. But they're alright. I like their small size, and I like the fact that they're made in Arizona. They're nice and simple.
Posted by Deanna Skaggs at 4:57 PM