I have an issue with holiday chocolate. Most often, it is cheap--even cheaper than usual. For instance, I may have eaten a Christmas candy this past December that had the KitKat label on it--but it did not taste like a KitKat. It tasted even cheaper than usual, positively run down with extra oil so that I wondered how they could put the usual KitKat label on it at all (and, you know, it isn't as if KitKats are great chocolate to begin with, though I do like them sometimes, anyway). Further, many times these holiday chocolate takeovers in store displays happen at certain holidays that are supposed to encourage the best within humanity, Christmas and Easter. (I'm not counting Halloween because there isn't as much chocolate candy as other kinds, and there it is at least called "candy" rather than "chocolate.") 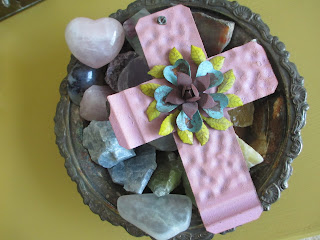 "Peace on earth and good will toward men" while I fill these stockings with cheap chocolate whose cocoa was grown by slaves? Let's celebrate the resurrection and the absolution of sin by eating a whole chocolate bunny whose production promoted child labor with slave conditions and otherwise entirely unethical processes? Okay.

You'll have to excuse me. I know we like to pretend that cocoa farming isn't an ethical issue because we have to go out of our way to read about it--and we feel like we have to go too much out of our way in order to avoid taking part in the negative aspects of cocoa farming. (Reminder, it isn't just chocolate bars. What else do you eat or use that has cocoa in it? Cereal, maybe? Store-bought cookies? Ice cream? Does the label say anything about that cocoa?) As you know, I have been growing increasingly uncomfortable about this.

So I wanted to offer some options in the face of those big store displays of what I'll simply call cheap chocolate. These are some ways to incorporate the idea of chocolate into your Easter celebration, if you so wish to do so, in contrast to the store displays. They will not only avoid the very cheap quality of Easter chocolate, they will also be, well, the more ethical choice to make.

When you think about it, avoiding questionable chocolate is actually one of the easier of the responsible choices/life changes that are out there (which have to do with so many issues, ranging from saving water to being less wasteful to making sure all of your products, food and clothing and others, are in the spirit of fair trade).

- Don't overlook chocolate bars just because they aren't in the shape of a bunny or don't say Easter on them. Most Easter chocolate is either the same as the non-seasonal kind (just in different packaging) or it's a cheaper version that's been watered down with extra oil (like the afore-mentioned Christmas KitKat). Just buy a good fair trade chocolate bar that you've chosen specifically for the recipient (usually milk chocolate for young children, etc.) and maybe make it festive with a spring-colored ribbon or by adding it to another gift or a card.

- If you're in a big city, there is good chance there is a chocolate maker nearby. Choose one who uses fair trade chocolate to make their confections or truffles. And they will all have some type of seasonal chocolate, whether it's just in seasonal packaging or it's in bunny shapes or maybe even has seasonal flavors. Yes, it'll probably cost more and take more time to get than just picking up bags of candy at Wal-Mart, but there are obviously many benefits to choosing this option instead.

- Buy fair trade chocolate bars and melt them into bunny or egg or carrot shaped molds. I recommend Theo's milk chocolate for both children and adults, or you can use your favorite dark chocolate if it's mainly for adults.

- Buy fair trade cocoa powder (and possibly also chocolate bars, depending on what recipe you use) and make brownies. Cut them into small pieces and put them in candy bags to give to children. If you're serving this as dessert rather than giving it as gifts/favors, you can do flourless chocolate cake instead, if you prefer.

- Speaking of dessert. Do you really feel like Easter won't be the same if you don't have a chocolate bunny? Children might because they're still completely subject to marketing, but do adults? Have cookies instead. Chocolate chip, lavender with rose frosting, whatever you like. Make sugar cookies in the shape of bunnies if you really must have bunnies around; you can even use a recipe involving cocoa powder so that they'll be chocolate bunnies. Make them in the shape of eggs and make an activity out of decorating them with icing--you could even hide the icing tubes in place of hiding eggs (and this way you know which colors haven't been found yet) (assuming you don't make your own icing, of course).

And if you're looking to read a little more, you might want to start with this short article from a couple of years ago on Huffington Post Canada.
Posted by Deanna Skaggs at 2:10 PM