If I remember correctly, the only time I've tried/reviewed Madecasse chocolate was after the San Francisco Chocolate Salon back in 2010. Once I write this date down, I don't feel as bad about not remembering details about what I thought of the chocolate since that was six and a half years ago. So I'm basically starting over with Madecasse, then. And what a beautiful new start it is. 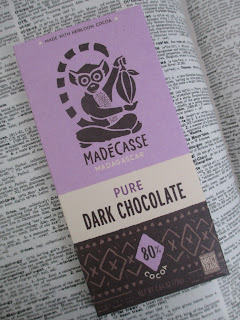 That first bar I tried had a neutral, sort of linen-colored paper wrapping, but now Madecasse seems to be going with the more common card box, adding a splash of color. Madecasse was on sale at the store (2 for $6, as compared to $4 each), so I took advantage of the sale (as one does when one buys chocolate regularly) and picked up the 80% and the 92% bars. That meant fingers crossed that I would like Madecasse's interpretation of extra dark chocolate (I like my new use of the word "interpretation." Sometimes that's how it is: I'll really love certain chocolates in this cocoa percentage range, but others I'll find unpalatable. Styles and tastes can vary so much).

Along with the splash of color, a lemur holding a cocoa pod adds to the hint of silliness in the packaging. It is, of course, a lemur because Madecasse uses cocoa beans grown in Madagascar for their chocolate. In fact, they have a goal to also make all of their chocolate in Madagascar, you know, make it at the source where it's grown; they say that this is "the key to global transparency in the chocolate industry." While I have had chocolate (probably not much) that was made where it was grown, I'm not used to seeing this as a goal for a company; so this is interesting. And of course, Madecasse uses direct trade cocoa; they are a company that is all about building relationship with the cocoa farmers. (Strangely, the 92% bar has all of its ingredients listed as organic, but none of them are with this bar. This leads me to expect that they're probably both organic, just for some reason this one isn't "certified." It is labeled as non-GMO, though.) In addition, their cocoa is heirloom. Ah, heirloom. I love that word. I like to buy, for instance, heirloom beans sometimes because they come in so many pretty colors and designs and such an interesting variety of flavors; they just tend to be expensive, too. But in this day of "beans come in two varieties, apples in three varieties, zucchinis in one variety, etc." it's important to encourage all of the varieties out there so that we're not just growing one or two types of each food plant. And so that we're not just growing newer, GMO varieties.

I'm ranting now. So I'll return to the chocolate.

The bar is simple, divided up into my favorite sized pieces. Thirty mouthful-sized rectangles. Though I like the sizes, I admit that this design isn't particularly interesting-looking. Still, it goes with the simpler, almost more rustic (as opposed to elegant and couture) style of Madecasse's packaging. 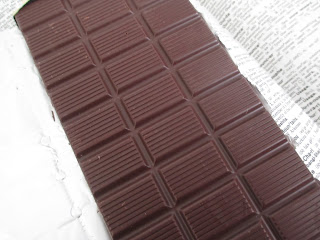 The chocolate's surface looks great and it has a pleasant aroma. Instantly on tasting, it feels soft in the mouth. The flavors start right away with a velvety, fruity chocolatiness. Then more of a blue flavor of cocoa nibs comes in. There is a very rich mouthfeel to accompany a perfect texture. There is mild darkness in the flavor without any bitterness at all, just depth and some of that usual Madagascar tang. I want to say that there is a hint of banana flavor as you pass the halfway point, but it's probably just a certain smoothness to the taste. It also tastes a little creamy, which is unusual for a chocolate at 80% cocoa. The finish is nice and lightly sweet, sweet being a flavor coming from the chocolate rather than from a sugary feeling. Might I add here that Madecasse has added no vanilla, so all of these sweet and creamy tastes I'm describing are simply from the chocolate itself (yes, there is sugar, but as I mentioned, this isn't a sugary taste and there also isn't enough of a percentage of sugar that it would be that noticeable in the flavor).

This is an absolutely lovely bar of chocolate. This is something that I would recommend to those who are teetering on the edge, still afraid to fall to the dark side. This isn't scary dark chocolate; it will romance you with its sweet tongue until you're completely in love and you forget that it's even on the darker side of cocoa percentages. And for those already familiar with the dark side, it will be a welcome reverie, a quiet dream of softness to encapsulate you in a peaceful moment of rest from all cares.
Posted by Deanna Skaggs at 11:20 PM