The End of the Aftermath Trilogy

My one word reaction to Empire's End, the last book in Chuck Wendig's Star Wars: Aftermath trilogy: WHAT?! 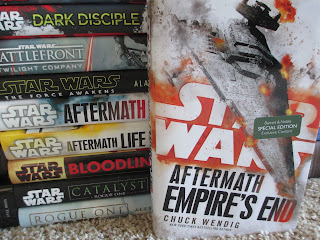 I've mostly been reading these Star Wars books in isolation because I don't think that anyone I know really reads them and usually the online comments I come across are fairly brief--but this time I think I might have to go look up the more detailed things that people online are saying about this book. It may have given us more questions than answers, or maybe it just left us at the same place as we were before--but it gave left one stunning little scene of apparent insignificance that could have potentially plot-changing significance (I'll talk more about this below).

As I mentioned before, I didn't overly love the first book in this trilogy, but the second one was pretty good. So was this one. This book is basically the lead up to and then the Battle of Jakku. So that in itself is fascinating to read, after we've seen the, well, aftermath of that battle in The Force Awakens. And not only were the scenes with Han and Leia nice (and the coming of baby Ben!), but by this point I found myself invested in the Aftermath team of Norra, Temmin, Bones, Jas, Sinjir, etc. They're an interesting set of characters in an equally interesting setting, and that makes the Aftermath trilogy worth a read.

Now for some spoilers into the plot of this book and into speculation on the upcoming films.


First of all, I thought that Rax was Snoke. Like I said, I haven't been keeping up with other people's comments on these books, so I don't know if I was alone in that thought. Then we come to that Interlude chapter between chapters nine and ten, and Mapo's physical description sounds just like Snoke. And then Rax dies at the end of the book, so unless he didn't really die or he somehow comes back (or Snoke isn't really alive), then Rax isn't Snoke--and I'm sure of this now. Because Mapo has to be Snoke. I have no idea how or why he become Snoke, but he must be. That in itself means little. I mean, Snoke has to be somebody. But why is Jar Jar Binks in that chapter with him? I was almost getting creeped out reading that short chapter, feeling like that theory about Jar Jar being a dark side user who influenced all the dark events of the prequel trilogy might actually be true (hence J.J.'s respectful comment that the theory was "very well written" or something like that, and Andi's comment on The Star Wars Show that she was going to bring Jar Jar into popularity). Actually, I guess his presence could simply be a reaction to the theory--a little teaser or a joke that means nothing about the plot but is just there to see our reactions. The fact that Jar Jar is there doesn't have to mean anything at all--I just wonder if it does.

Because there is still the question of how Mapo becomes Snoke (assuming that he does). If Jar Jar (I can't believe I'm writing this) is one of the "Imperials considered loyal" that are being summoned to the Unknown Regions at the end of the book, then he could choose to bring Mapo with him when he goes. And Jar Jar doesn't necessarily have to be in control of anything for this to happen; it could just be that, because he knew the Emperor first as Palpatine, he never really understood Palpatine's evil plans and therefore never shed loyalty for him and is simply a dull-minded subject of a greater (and evil) will.

So there's that. I've put out my thoughts without seeing what anyone else is saying.

Then there is also the question of Rey. Since Rax was from Jakku and he ended up returning to Jakku, I wondered for a time (when I still thought that he was Snoke) if maybe he was Rey's father. It makes sense. In the OT, Darth Vader was Luke's father. So in the ST, Snoke turns out to be Rey's father. So once I switched Snoke from Rax to Mapo, this theory switched over, too. If I have my dates right, he would be about twenty when Rey is born, so the ages work. And I'm going to hold onto this theory that Snoke (whoever he is) is Rey's father because it does seem like a very obvious possibility and I don't know why it didn't occur to me until I started reading this book.

Along the way, I continued wondering if there was significance to Rae Sloane's first name. We all know that Rey took her name off of the flight helmet she found, but literature can work in many ways. So I kept wondering if Rae Sloane might be Rey's mother--and there was neither evidence for nor against this. Except perhaps in that one passage where Sloane says she's never had someone to love or family or a child or anything like that--that could possibly imply that she wants family. But Finn could easier end up being her child than Rey since Finn was raised in the First Order and Rey is out there on Jakku.

Why is Rey on Jakku and why, why in any story is this the question we keep coming back to? Who is Snoke, who are Rey's parents, and why is Rey on Jakku? Yeah, this book didn't answer any of that, unless the answers are very hidden (maybe only the wise can see them).

Oh, yes, and did you notice Han's advice to his son? Don't take the straight and narrow path; sometimes it's better to take a curvy path. Hmm. Maybe Han did have influence on his son, and Ben grew up not aligning himself tightly to the light side because his father told him not to. Be careful what you teach children, eh? Han likes to bend the rules simply by smuggling, but Kylo Ren bends the rules of the Force.

I suppose that's it. This book was a fascinating look at the "end" of the Empire, showing at least a part of Palpatine's contingency plan and kind of just egging us on to keep pondering theories.