Kittens at Out of Africa

Time for more Out of Africa pictures. I had to squeeze in a trip there a couple of weeks ago to see all of the tiny big cats. There are so many right now. Since they'll be grown in no time and I'll spend years seeing them full-grown, it means so much to also be able to see them when they're small.

The young tiger, Sunrise, was awake and chewing on a toy when I went by. 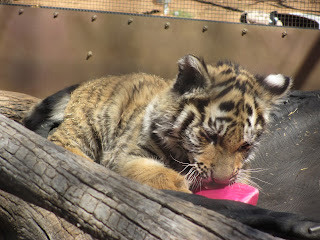 The three little lions, Kitanga, Ajabu, and Jabari, were playing and walking around in the morning and then napping in the afternoon. 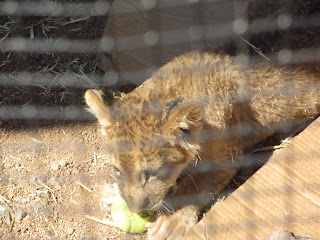 Even though it seems like a long time since Out of Africa took in the rescued otter who has since been named Totter, this was the first time I saw the slippery critter, who was sliding through the water and the land with plenty of energy. 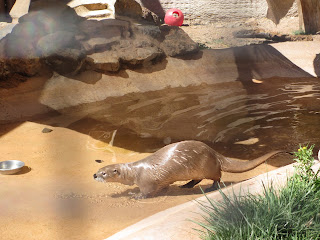 And what's Out of Africa without all the great views of the Verde Valley? I love seeing the San Francisco peaks standing white with snow on the horizon: they speak of the diversity of the Arizona landscape, all visible in just one glimpse. 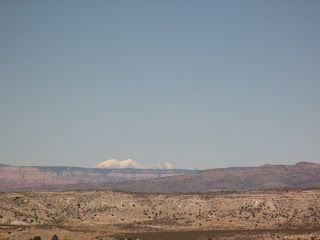 You can't see him very well in this picture, but Ted is back there (to the right) sitting on his high platform while his women, Lady and Kayla, are up close. Lady and Kayla always seem to give the opportunity to stand just a few feet away from lions; that feeling of seeing all their power and yet getting to admire them through the safety of fences never stops being incredible. 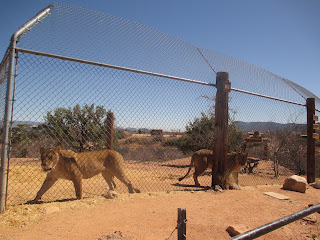 And yes, the little lions are Ted's. Here they are sleeping in the afternoon. I just sat and watched them for a bit: they're truly adorable. 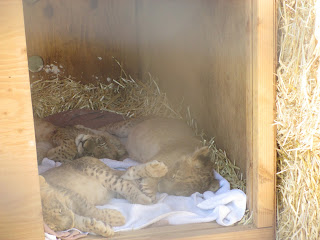 And who did they bring in for Wonders of Wildlife? Sage, the young mountain lion. This was his first time being in the arena for a show, so once again they were mainly getting him used to the space and to the different types of toys and to the audience. 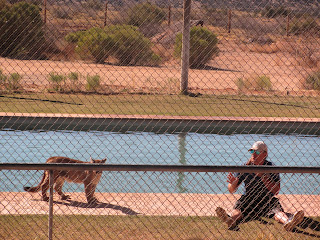 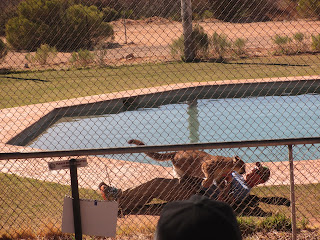 Cue the moment where Jeff, while narrating the show, explains that they all have to take an IQ test before starting work there. If they score at all high, they don't get hired.

Yes, as much as I'll go to watch someone play with a mountain lion even to the point of letting it climb on top of them, I, ah, wouldn't do that myself. But that's why I love Out of Africa: they love these cats and they let us have a glimpse into those relationships that they have with them. 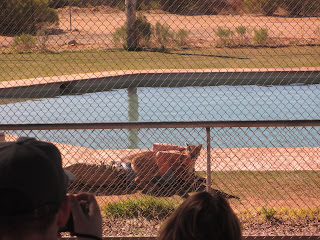 And speaking of everyone there being crazy. They built a cardboard house that they put in the arena. Why? Because it's fun. They didn't even coax Sage to go in or anything; he just went right in on his own as part of his exploration of the space. 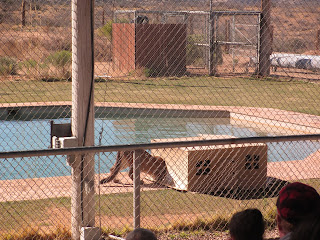 And he came right back out through the front door. 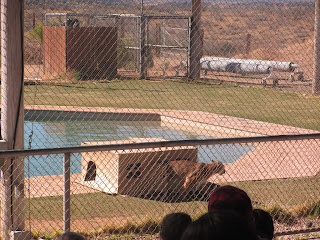 Sage did so well. He looked comfortable with everything and he was really with engaged with everyone and interested in the toys. 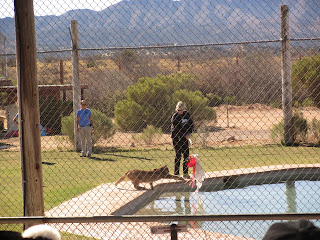 He even did some nice leaps into the air. 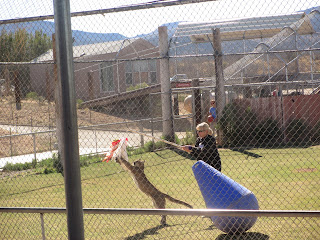 Sage, we shall watch your career with great interest.