Jedi, Thou Art Not the Last

Has it really been nearly five years since Ian Doescher's Shakespeare's Star Wars series began? It was just one of those random, fun concepts that could have played out and died all in a moment, except that the combination works so naturally and he plays it out so well that . . . keep it coming. 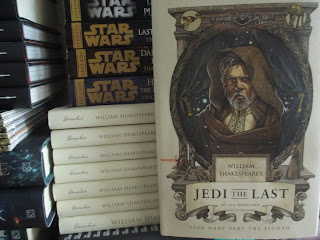 When you begin the eight book in a series like this, you kind of pause, like, okay, here we are again. And you're not exclaiming over all the verses and the references like you did the first time, except that that's what suddenly makes it all so wonderful. You're reading it at a regular pace, like a piece that simply flows. This language, elevated and poetic, fits the story perfectly.

If there is anyone who had mixed feelings about character actions or motives in The Last Jedi, this is the perfect book to read. When I talked about The Force Doth Awaken, I mentioned how Ian was able to do less of a look into characters' heads than he'd done in previous books because for the first time he was going over a story where we only had one piece so far. He couldn't add extra bits about, for instance, Kylo's motives because we didn't really know all of his motives or all of his story yet. The same thing is happening here but to a lesser degree because, of course, there is much about the story that Episode VIII reveals. And even with what we don't know, he did such a beautiful job at expressing what we do know that it hid the fact that there may still be a little more to the story.

Kylo's conflict. Rey's similar identity crisis. Luke's feelings of failure. Poe's reasons for going against Holdo and Holdo's reasons for doing things the way she did.

As I've mentioned before, this series has moved on from being just a humor series. There are beautiful and genuinely moving passages in here. I particularly like the moment in which Kylo and Rey touch fingertips and also the moment when Kylo defeats Snoke. Does anyone truly think Kylo is weak; don't they see how much strength it would have taken to do the sneaky thing he did there? Wonderfully expressed.

So, yes, may this series live on.
Posted by Deanna Skaggs at 8:55 PM