Apparently Theo doesn't want me to eat this chocolate of theirs: they have labeled this line Kids' Crunch. The flavor I have (against, perhaps, the will of Theo) is the Banana Milk Chocolate. I love for brands like Theo to come out with casual and/or candy chocolate like this--I just don't know that it had to be labeled as for kids in order for that tone to come across. 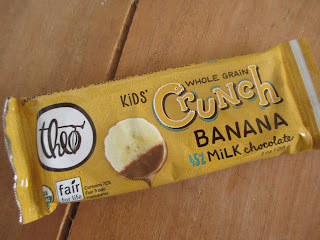 Sure, though, the name instantly tells you that it's candy and that it's something you can put in your kids' lunch boxes and that it's not just a sweet treat but also an alternative to other products like Hostess Cupcakes or, more specifically, Nestle Crunch bars. You'll notice the "whole grain" bit in the name, too, that tries to say, hey, this is "healthy," too. And like with the Peanut Butter Cup from Unreal, there is puffed quinoa in here in addition to the puffed brown rice. I still don't see the point; I still see this simply as a way to look trendy (which probably works, so much as I might roll my eyes at it it's probably a smart move).

The packaging doesn't really have much of a kids' specific design style, except for the voracious letter "C." The bar itself is very plain, smooth on one side with the crisped rice visible on the other side. It's almost too basic of a look, except that that's kind of the idea. The aroma? Darker milk chocolate, since this is Theo's 45% milk chocolate, which is definitely darker than the average milk chocolate, especially in terms of candy (I see nothing wrong with the syntax of that sentence). 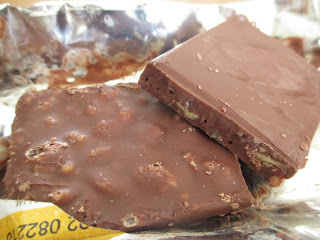 Start nibbling in and you'll get the crisped rice and the banana and the chocolate. Pretty straightforward. The crisped rice and quinoa add the same familiar texture of a Crunch bar.  The bananas are freeze-dried (as opposed to the banana chips in the Black Butterfly toffee), so they do taste like banana. Banana isn't, after all, one of those flavors that you can fake. I always remark on the rarity of banana in chocolate products, but it does seem like it's showing up more often now than it did a few years ago. That must be to please me, right?

I wonder (and kind of hate to wonder) if the 45% milk chocolate might be a little too dark for a bar labeled as being for kids. You never want to put too much past the palates of the young ones, but they do tend to prefer sweeter things. Still, though, this chocolate should be sweet enough--and anyway, I know I won't be the only one to ignore the label. Adults want chocolate candy, too, you know, and many of us will be glad for a more substantial milk chocolate.

The more I ponder the name, the more I imagine that it was just the way they were able to use "Crunch" while not making this sound like a Crunch bar. "Kids' Crunch" makes it sound almost more like a granola bar, while a name like "Chocolate Crunch" would have sounded most definitely like an alternative to a Crunch bar. (Though would that really be such a bad thing? Newman-O's and Trader Joe's O's are all blatant alternatives to Oreos.)

The short of it: I like this product but I don't like that its label says it isn't meant for me.
Posted by Deanna Skaggs at 11:16 AM