Time to give some attention to chocolate candy, starting with an alternative to Reese's Cups. There are plenty of Reese's alternatives these days, most commonly from Theo and Justin's. But I'd never had Unreal's version before. 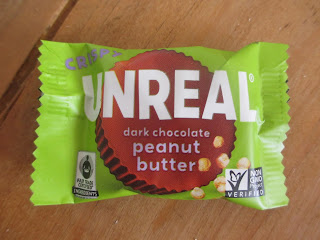 These also come in bags, though the one I got is just one tiny peanut butter cup in a sole wrapper. And yes, sole wrapper means that, like most of the Reese's alternatives, there is no cupcake style sleeve; it's just the one outside wrapper. While I do like the green color, green means that these are the Crispy ones, which I didn't realize when I bought them. The red are plain dark chocolate and the green are with almond butter instead of peanut butter. Unreal also makes alternative M&M's; those come in milk chocolate as well as dark but the cups only come in dark chocolate. 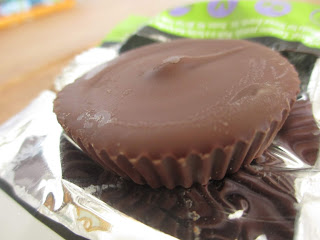 I did call this peanut butter cup tiny: it's definitely smaller than the standard size. Candy can come in small because candy is cute, so I have no problem with that. The aroma is of dark chocolate. Here I'll note that as part of the "alternate" traits like no artificial ingredients and the use of sustainable and organic ingredients, this chocolate is also fair trade. To me, when it comes to chocolate, that's becoming more important than the rest (usually you don't get fair trade without the rest, but still I feel like, if anything, that should be the priority). I've said it before: of course I want couture fair trade chocolate but I also want there to be casual fair trade chocolate, including fair trade chocolate candy.

The chocolate is sweetened with both sugar and agave nectar, I suppose in an effort to make it "healthier." I wonder if the agave is what makes me lean toward feeling like this chocolate is slightly oily (I kept checking the ingredients to see if some of the palm oil might be in the chocolate instead of just in the peanut butter). I can't say for certain, though, if this is the case or if I'm just making it up. And even if it is, the fact that this is candy means that, well, a tad more of an oily texture is fine. The chocolate tastes nice, after all, even when I try and nibble some of it on its own from the edges. It isn't that sweet dark chocolate that I hate coming across in the confection territory. It has flavor to it but also is neither bitter nor strongly sweet. The perfect dark chocolate for a candy product.

The peanut butter is the kind you'd expect from an alternate version. I've had this kind before but I don't know when. (I should have just gathered up all of the Reese's alternatives and done a mass review, shouldn't've I?) It's less greasy and more almost crumbly than the peanut butter in a Reese's cup, almost more like Mazapan (the Mexican peanut candy). The salt element (Reese's cups have made a salt element necessary) tastes more like salted chocolate than salty peanut butter.

And the crispy element? Like I said, I didn't even realize when I bought this that there was a crispy element. Instead of using crisped rice, this is crisped quinoa (why make that change I don't know, except to make it sound like part of a health trend). The crisp works as far as crisp goes; the effect is the same. But I have no interest in crispy peanut butter cups; the crisped crisps were just an element I tried to ignore. So if the idea doesn't sound appealing to you, either, I'd recommend just sticking to the non-crispy version.

On the whole, a decent alternative to the famous one. Maybe not my absolute favorite of all of the ones I've tried, but definitely I'd place this one on the successful side (and that can't be said about all of them).
Posted by Deanna Skaggs at 9:34 AM